Who is Alan Smithee? 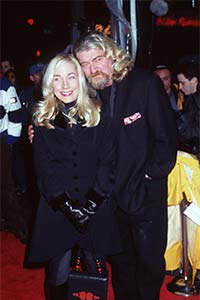 Joe Eszterhas and his wife attend the premiere of 'An Alan Smithee Film: Burn Hollywood Burn' in 1998 in Westwood, Calif. Eszterhas was the screenwriter of this box office bomb.
Brenda Chase/Online USA/Getty Images

We've all had times when we've wanted to disown our failures, whether they're our fault or not. A disastrous assignment, a botched presentation, an embarrassing interview -- wouldn't it be nice to slap a fake name on it and pretend it happened to someone else? Hollywood directors have the option of doing just that. They can completely erase themselves from unsuccessful projects by using a pseudonym. And for 30 years, that pseudonym was Alan Smithee.

Alan Smithee's first film was 1969's "Death of a Gunfighter." The original director, Robert Totten, didn't get along with the film's star, who had him replaced with a guy named Don Siegel. When all was said and done, neither Totten nor Siegel wanted credit for the film, so the Directors Guild of America (DGA) had to come up with a pseudonym. Rumor has it that the name was created as an anagram for "the alias men," but that's probably just a funny coincidence. The more likely story is that the guild was trying to come up with something generic-sounding but couldn't take someone's actual name, so the two E's were added to "Smith."

From 1969 through 2000, Alan (or Allen) Smithee racked up about 40 film, TV, and music video credits [source: Prendreigh]. Sometimes, the theater version of a movie was credited to the actual director, but Smithee took credit for the TV or airplane edit. To make a case for a Smithee credit, the dissatisfied director had to prove to a DGA panel that his or her creative vision had been quashed, through studio interference or otherwise. Once the pseudonym was in place, though, the director was forbidden to speak publicly about the circumstances.

Over the years savvy moviegoers started to learn what the pseudonym meant and "Alan Smithee" became synonymous with "box office disaster." The Directors Guild obviously wasn't happy with that development. The final nail in Smithee's coffin was the 1998 movie "An Alan Smithee Film: Burn Hollywood Burn," about a director named Alan Smithee who tries to disown a disastrous movie. (It was, of course, credited to Alan Smithee, and Roger Ebert called it a "spectacularly bad film.") In 2000, the DGA officially discontinued the use of the Smithee name [source: Prendreigh].

So what's a disgruntled director to do now that Alan Smithee no longer exists? The DGA does still offer the pseudonym option, but there's no standard name anymore. And because the parties involved are sworn to secrecy, it can be hard for the general public to tell when a movie's been disowned. The first known film of the post-Smithee era was 2000's "Supernova," which was credited to "Thomas Lee" after the studio had Francis Ford Coppola re-edit director Walter Hill's version. And "Shortcut to Happiness," Alec Baldwin's directorial debut, is now credited to "Harry Kirkpatrick." Apparently Baldwin asked for the change after the studio re-edited his drama into a comedy. The film wrapped in 2001 but didn't hit theaters until 2007, to overwhelmingly terrible reviews.