10 Unbelievable Toy Stores Around the World 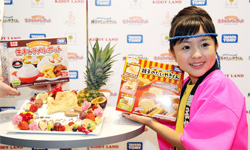 Like the ubiquitous Toys R Us stores in the United States, Kiddy Land stores can be found throughout Japan, with more than 80 stores spread throughout the country [source: Kiddy Land]. With so many locations, Kiddy Land's flagship store in Harajuku, Tokyo is something special. It started as a simple bookshop in the 1950s, and eventually expanded to fill five stories with virtually every type of toy imaginable. Visitors will find Star Wars and Peanuts-branded merchandise alongside traditional Japanese favorites like Hello Kitty and Rilakkuma. The store is known for its specialty shops and boutiques dedicated to specific characters and brands, which include many special release items that can't be found anywhere else. Like the rest of the surrounding Harajuku shopping district -- and like all great toy stores -- Kiddy Land is jam-packed with an overwhelming array of merchandise, shoppers and visitors. The store also houses plenty of gashaspon machines, which spit out small toys encased in capsules or eggs -- for a small fee of course.

The Lego Imagination Center at Orlando's Downtown Disney complex is half-store, half-playground. It's the largest Lego store in the U.S., and shoppers looking for specific sets are likely to find what they're looking for, including both standard and Disney-themed sets -- Cinderella's Castle anyone [source: Disney]? Those seeking individual pieces should seek out the entire wall of the store dedicated to single components, all neatly arranged in compartments for easy shopping. Beyond the blocks, visitors can purchase souvenirs and Lego-themed apparel, like T-shirts and pajamas. If you're more interested in browsing, the inside of the store offers several tables equipped with blocks for free play. Outside beneath an awning, Lego lovers can play in the 3,000 sq. ft. play area, or build and race a custom Lego racecar. If it's inspiration you seek, check out the ever-changing displays of life-sized figures, including an impressive sea serpent made entirely of bricks who guards the nearby lagoon.

The town of Kellogg, Minn., is home to one of the largest family-owned toy stores in the United States. Part retail store and part amusement park, Lark Toys offers 20,000 square feet of fun [source: Hansen]. The store opened in 1983, primarily to sell a line of handcrafted wooden toys. Over the years, the toy selection expanded, though you can still purchase a variety of wooden toys made by hand on site. When you're finished shopping, head to the food court for a meal, or get your sugar on with some local fudge or candy. Lark also houses an 18-hole mini-golf course, an antiques toy museum, and, oddly enough, a trio of llamas. The piece-de-resistance at Lark is the wooden carousel, which founder Donn Kreofsky spent nine years carving and painting by hand. For a small fee, kids or adults can take a spin on a piece of Minnesota history.