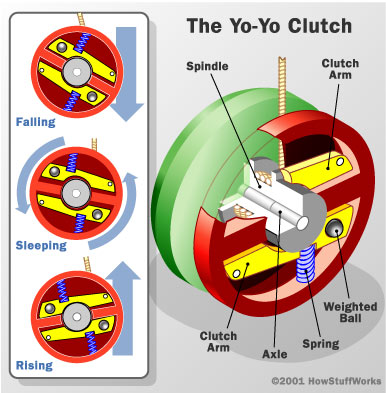 In this yo-yo, a clutch mechanism releases the axle when the yo-yo is spinning quickly and grips it again when the yo-yo slows down. This makes the yo-yo come back automatically before it slows to a stop.

In the yo-yo craze of the 1990s, a new sort of automatic yo-yo started popping up everywhere. Yomega, the leading manufacturer of these yo-yos, advertised their model as "the yo-yo with a brain." It does seem like these yo-yos have some level of intelligence, since they know exactly when to sleep and wake up, but the "brain" is actually just a centrifugal clutch. You can see how this mechanism works in the diagram below.

As in the ball-bearing yo-yo we looked at in the last section, this yo-yo design does not let the string touch the axle directly. Instead, the string is wound around a spindle piece. The axle, which is mounted to the two halves of the yo-yo, runs through the middle of the spindle, but the two pieces are not actually connected.

The spindle and axle will move in unison when the yo-yo spins slowly, however, thanks to the yo-yo's clutch mechanism. The clutch mechanism, which is housed inside one of the yo-yo discs, consists of two metal spring-loaded arms. These arms are weighted at one end and connected to the body of the yo-yo at the other end. When the yo-yo is stationary or spinning slowly, the springs press the arms up against the spindle, so the spindle's rotation turns the entire yo-yo. But as the yo-yo speeds up, centrifugal force pushes the weighted ends of the arms outward, against the springs. The arms release the spindle, so that the spindle and the rest of the yo-yo move independently.

When you throw the yo-yo, it initally spins slowly. The clutch is locked, and the discs are spun by the unwinding spindle. But just before the yo-yo has reached the end of its string, it is spinning fast enough that the clutch releases the spindle. The disc's angular momentum keeps the yo-yo spinning, but the spindle slows down. Eventually, the discs slow down too, and the centrifugal force acting on the arms decreases. When the outward centrifugal force dips below the inward force of the springs, the arms clamp shut on the spindle. This transfers the spinning motion of the discs back to the spindle, which causes the spindle to rewind the string and return to your palm.

This toy is a lot more elaborate than the terra-cotta yo-yos of ancient Greece, but it has the same basic appeal. Yo-yos continue to be so popular because of their wonderful simplicity. There's some undefinable magic about taking an ordinary spool and, with nothing but a flick of the wrist, turning it into an active, spinning top. No matter what advanced mechanisms are added to yo-yos, this simple joy will be the heart of their appeal.

To learn more about yo-yos, including how to pull off some popular yo-yo tricks, check out the links below!