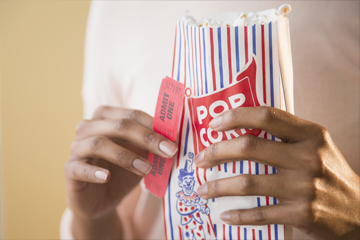 Many theaters have recently raised their ticket prices in order to cover expenses for upgrading to 3-D projectors and other technologies.
Donna Alberico/Getty Images

Going to the movies used to be a fun, inexpensive time out -- a good date idea or a way to entertain the kids on a rainy afternoon. Lately, though, it seems like you practically have to spend a week's paycheck to cover a few tickets and enjoy a little popcorn. As of July 2014, the nationwide average price of a movie ticket was more than $8.00, but in metropolitan areas, a ticket can cost more than $10 [source: Cunningham]. And we're just talking regular films here, not IMAX or 3-D, for which tickets can cost between $15 and $20 apiece.

Why are movie tickets so expensive? Who makes the money: the movie theater or the movie studio? Typically, theaters and studios split the proceeds of ticket sales, but the theater sets the ticket price. Theaters actually make the majority of their money on concessions, which is why you find yourself paying steep prices for popcorn, soda and candy. Historically, movie theaters have increased the price of concessions rather than tickets.

But recently, many theaters have raised their ticket prices (especially for premium movie experiences) in order to cover expenses for upgrading to 3-D projectors and other technologies. These surcharges can make seeing an IMAX film quite expensive. For example, at the time of this writing, purchasing an IMAX movie ticket costs $21.50 in New York City. That means if you want to take your family of four to see an IMAX movie, you're spending $86 -- and that's without a single bag of popcorn [source: Sampson]!

The steady rise of movie ticket prices is part of a vicious cycle. Moviegoers just aren't going to the cinema as much anymore; instead, they're saving their money and watching movies via streaming services or on-demand in the comfort of their own homes. To try to lure their customers back, theaters are offering better viewing experiences, like luxury seating, full-service menus, reserved seats and more. Theaters need to pay for these upgrades somehow -- and that's reflected in a higher ticket price. See how it just goes around and around?

It seems everyone is a loser in this scenario. However, an emerging business model might offer an interesting solution. A new company called Movie Heroes offers a subscription-based service to smaller movie theaters. Instead of paying for a ticket every time people see a movie, they pay a monthly subscription fee that allows them to see as many movies as they want. When enough people sign up, theaters have a stabilized revenue stream. The company's first customer, a theater in California, increased revenue from $700,000 to $1.5 million after signing up with Movie Heroes [source: Pomerantz].

At the moment, subscription-based services lend themselves best to small, independent theaters, but the model is an attractive one. Could it bring down the price of movie tickets without decreasing the quality of a blockbuster movie experience? The future will tell. In the meantime, save some money by opting for matinees and bargain showings.