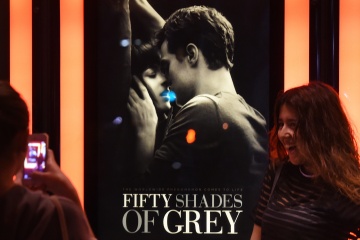 If you thought movie poster designers were colluding on color, wait until you see just how often the same images get recycled. If you pay attention on your next few trips to the theater, you'll find that the images used on movie posters tend to fall into one of just a half a dozen or so tired categories. It's as though the studios spin a wheel to decide what pose the stars will take on the marketing materials for a movie.

Don't believe it? Consider the classic back-to-back pose between the film's stars on the posters for "Pretty Woman." You've seen it more than once since then; think "How to Lose a Guy in 10 Days," "Ghosts of Girlfriends Past," "Four Christmases," "Laws of Attraction" ... the list goes on. Since "Pretty Woman" hit it big, the classic back-to-back pose has become practically a requirement for the rom com. Studios continue to reuse this pose, hoping you'll make associations in your head between "Pretty Woman" -- a major hit -- and whatever light-hearted comedy the studio is trying to convince you to see at the time. The pose is familiar and may make you more likely to see a film you may normally have skipped [source: Plumb].

Of course, the commitment to the standard image doesn't stop with romantic comedies. Making a poster for an action flick or thriller? You've obviously got to stick to the required image of the film's hero running through the streets, preferably at an angle, and oh, don't forget to give the entire poster a blue tint. This formula is sure to make the public associate your movie with successful ones in the genre such as "Taken," "Body of Lies," "The Firm" or "The Happening." All of these films relied on the same, nearly interchangeable movie poster [source: Barackman].

When studios run out of ideas for marketing a movie, many rely on the old adage "sex sells" and plaster the image of a star's head across the entire poster. For an even more conspicuous version of this trick, consider the posters dominated by a fine set of female legs, often with some sort of scene from the movie playing out in miniature between a set of sky-high heels.

Finally, consider the romantic drama -- or every Nicholas Sparks film ever. Put the posters for these movies side by side, and you'll see the same image repeated with a different set of stars: The male lead cradles the female's head in his hands and goes in for the kiss [source: Smith]. Bonus points for a beach or a sunset somewhere in the background.

Sure, Hollywood has the bucks to invest in cutting-edge posters that are ripe with originality, but as long as the same old images keep filling seats, movie studios have little motivation to move beyond the classic color schemes and poses so familiar to modern movie fans.