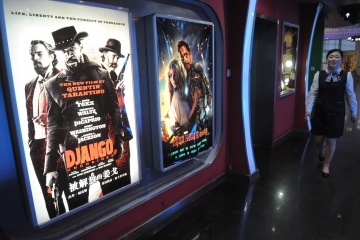 How many cliches can you spot in these movie posters?
PETER PARKS/AFP/Getty Images

Stroll down the halls of your favorite movie theater, and you may find yourself wondering why every poster in sight seems to be advertising the exact same movie. Take a closer look, though, and you'll spot subtle differences that reveal that these look-alike posters are actually designed to showcase completely different films.

It's no secret that Hollywood loves its sequels and franchises, its reboots and re-releases. While Tinseltown is clearly set on rehashing classic film ideas, the same is true for movie poster designers, who seem to stick with a handful of tried-and-true designs. Any idea that meets with even a glimmer of success is quickly copied and reused, again and again. (Think 3-D technology after "Avatar.") Call it the bandwagon effect, or call it desperation to recapture some of the hundreds of millions spent to make a major picture. In Hollywood, if it ain't broke, they don't fix it.

Once you start paying attention to movie posters, you'll find that the majority rely on the same cliches to catch your eye. Every new release may leave you thinking you've seen that poster before -- that's because you probably have. Read on to learn about some of Hollywood's favorite movie poster formulas and to understand more about why these tired tricks may actually convince you to see a movie you might have normally skipped.