Who decides what words you can't say on TV? 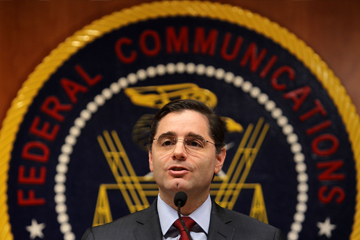 Former FCC Chairman Julius Genachowski oversaw the government agency that decided what you can and cannot say on TV.
Alex Wong/Getty Images/ThinkStock

The Federal Communications Commission (FCC) decides what words you can't say on TV. Specifically, the FCC prohibits — between the hours of 6 a.m. and 10 p.m. — "language or material that, in context, depicts or describes, in terms patently offensive as measured by contemporary community standards for the broadcast medium, sexual or excretory organs or activities" [source: FCC]. However, these rules only apply to broadcast television — not to cable or Internet TV.

Furthermore, broadcast channels break FCC rules fairly often, either accidentally or by pushing the boundaries. In some cases, rule breakers face fines. In other cases, the FCC either decides that the rule doesn't apply or it simply declines to enforce its own penalties. One famous incident involved Bono, lead singer for rock 'n' roll group U2, who in 2003 dropped an uncensored F-bomb during the Golden Globe Awards. The FCC reviewed the incident and first decided that the fact that Bono used the f-word as an intensifier, rather than using it to describe "sexual organs or activities," meant that Bono didn't actually violate FCC regulations. However, under pressure following a number of indecency complaints (remember the boob seen 'round the world at Janet Jackson's 2004 Super Bowl halftime show?), the FCC changed its mind and ruled against Bono — but declined to fine him. Unsure about the nuances of FCC regulations, broadcast networks often push the envelope by using devices like writing profanity into scenes and then obscuring it with taxi horns and other background noise.

To add to the confusion, in 2012 FCC rules got a little more complicated when the Supreme Court threw out fines for "fleeting expletives or nudity." Rather than ruling that "fleeting expletives" (like Bono's F-bomb) should be allowable, however, the Supreme Court merely slapped the FCC on the wrist for failure to adequately advise broadcasters that it had tightened its standards.

The ruling, coupled with the fact that the FCC hasn't offered any further clarity or guidance on the matter, leaves both broadcast networks and television viewers wondering: What exactly are the standards? New York Times reporter Edward Wyatt asks, "the next time Cher appears on a live awards show, should adult viewers cover the ears of their 8-year-olds, or can they depend on the broadcasters to censor indecent content?" [source: Wyatt]. Self-governance initiatives like Clear Channel's proposed "Commission for Responsible Broadcasting" have failed to gain a foothold in the unregulated world of cable television. There isn't much reason to expect broadcast television to self-regulate, either. If you're hearing words you'd rather not hear on TV, your best bet is to investigate the channel-blocking and privacy settings on your DVR or cable box.

10 Cooking Shows That Changed the Way We Eat
King of the 'Hill Street' Quiz: How Much Do You Know About TV Icon Steven Bochco?
Why don't all TV networks stream their shows online?