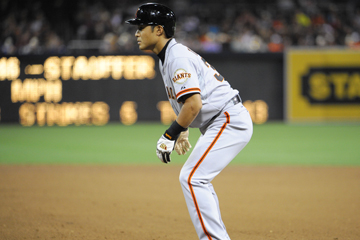 Kensuke Tanaka of the San Francisco Giants leads off first base after hitting a single during the fourth inning of a baseball game against the San Diego Padres. See more baseball pictures.
Denis Poroy/Getty Images

For Brewers shortstop Jean Segura, the April 19, 2013, baseball game against the Cubs began like any other. Before long, though, it would devolve into an Abbott and Costello routine.

Segura stole second, attempted to steal third, ended up on first and was thrown out stealing second – again [source: Stark]. And here's the kicker: Every move was within the bounds of the Major League Baseball rulebook.

An obscure addendum to a rule that forbids players to run the bases backward saved the play -- rule 7.08(i). Turns out, runners who truly become confused can trek the bases backwards [source: Major League Baseball].

So how did Segura go from third base to first and then second?

After reaching first base, Segura stole second on the next pitch. Three pitches later, Segura stole third before the pitch was sent. Segura got stymied by a watchful pitcher, returned to second -- and ran into the runner from first who also reached second base. Segura thought he was tagged by the ball and headed back to the dugout. And that's when he discovered he wasn't out after all. He headed back to first base. Two pitches later, Segura stole second and was actually tagged out. He stole second -- twice -- in the same inning. With only one at-bat [source: Stark].

Getting to first base isn't usually as complicated as Segura's run, but it definitely could be. In fact, there are 23 ways a runner can reach first base, many of which are so infrequent that few fans (and maybe even players) can identify them.

At its most basic, a baseball game pits two teams of nine players against each other. The idea is to score more runs than the opposing team and win the game. To do that, however, a batter must become a runner. And get to first base.