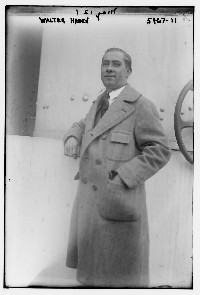 When Hagen did take his one and only head-pro job at a club, at the Oakland Hills C.C. outside Detroit, it was while the course was under construction. When it opened for play, he quit the post.

It was not for Walter Hagen to stand for hours in the sun giving golf lessons; to spend his time in a small, cluttered shop selling clubs, balls, and tees; to be an underling in the employ of anyone.

That was a brave way to go in the first decades of the 20th century, when golf was still new to the United States and there was only the merest beginnings of a tournament circuit.

Did Hagen foresee a time when many men might follow his lead? Probably not. Hagen was simply dancing to his own inner music. Still, in his daring Hagen had set a precedent. It was not to be followed by too many in his time, but he initiated the notion that an outstanding golfer could make his way in the world by showing off his talent to the public eye.

As Herb Graffis, a pioneer golf periodical publisher, put it in 1980: "Today's [Tour] pros should light a candle every day of their lives in the memory of Walter Hagen."

Because Hagen was such a colorful personality, he also got the game of golf on its way as a significant sporting pastime among the populace at large.

How did Hagen do it? It wasn't with his long game. With his long, loose swing, he was often wild off the tee and inconsistently accurate even from the fairways.

Nevertheless, Walter played at the highest level from 1914-36. During that 22-year period, Hagen won a total of 44 events, including two U.S. Opens, four British Opens, and a record-setting five PGA Championships, four of them in a row (1924-27).

He did it with a vivid imagination when in trouble -- an eye for finding a gap in the trees and a gift for fitting a ball through it -- plus a magnificently deft touch as a chipper and putter.

Just as important, he had not a doubt at all of his ability. Playing one of the most frustrating of games, he never let golf get him down. His "philosophy" of golf was expressed in a couple of simple homilies: If you find yourself hooking the ball on a given day, just aim to the right a little more; also, he expected to miss seven shots per round and didn't fret when they occurred.

While the majority of Hagen's victories were at stroke play, his forte was as a match-play competitor. In this mano-a-mano format, he was a master psychologist who, for one thing, knew full well that his disorderly tee-to-green game made him seem like easy pickings for the purer ball-strikers, but who would be rendered limp, if not angry, by Hagen's amazing recoveries from trouble.

Adding to that was the brio with which he pulled off his miracles. He also understood the effect of pressure on athletes. In this regard, Hagen's most memorable remark came when he was told, while preparing to spend a night on the town on the eve of the final match for the 1926 PGA Championship, that his opponent, the nervous Leo Diegel, was already in bed.

Walter Hagen reflected a classic American success story, the athlete playing his way out of humble circumstances. He was born in 1892 in Rochester, New York, the son of working-class German immigrants. His father, a blacksmith, advised his son to learn a trade and thought his boy a "bullhead" for passing up carpentry.

As a youth, Hagen was an excellent ice skater and baseball player. His first athletic sights were set on playing major league baseball, and in a tryout with the Philadelphia Phillies in the winter of 1912, he received a very favorable review.

But he also had been playing golf, beginning as a pre-teen caddie. During the summer after his baseball tryout, he tied for fourth in the second golf tournament he had ever entered, the U.S. Open. When he won that championship the next year, his future was settled.

What set Hagen apart, aside from his athletic gifts, was his instinct and flair for showmanship. "Barnum and Bailey rolled into one," said Graffis. But Hagen somehow gave his "circus act" a kind of salon quality. He had a way of walking with his head tilted up, like royalty, that -- along with the lifestyle he developed -- would earn him the lifelong sobriquet "Sir Walter."

His son, Walter Jr., once suggested that his dad's love of the high life came from the days when his father caddied at the Country Club of Rochester for such people as George Eastman (founder of Eastman Kodak) and other wealthy, sophisticated people.

Hagen was beguiled by the talk he heard of travel and the high life. Watching from a respectable distance as the club members danced away summer evenings, the young Hagen was entranced. He did not resent the rich; he simply wanted a piece of their action.

In Walter Jr.'s words: "It set Dad's standards. He always wanted a look of success." Walter Sr. put it another way, memorably: "I don't want to be a millionaire; I just want to live like one." He did just that.

And yet, for the silk shirts, tailored knickers, jeweled cuff links, and other accoutrements associated with the high life that Hagen fancied, he also projected the down-to-earthiness of the common man. Certainly the ordinary citizen golfer could identify with Hagen's unkempt, razzmatazz golf.

Hagen stood at the ball with the wide stance of a home run hitter, made a rainbow-arc swing that ended with an unfettered lunge, sprayed shots all over the lot, and was consistently flirting with danger -- from which he recovered with insouciant aplomb.

Furthermore, with Hagen there was none of the dour gravity brought to the game by the Scottish pros who emigrated to the United States and were golf's first showcase players in the country. Hagen was a joy to watch because he obviously enjoyed what he was doing. He never complained about a golf course -- he called them all "sporty little layouts" -- and as a friend once remarked, he "never had a temper."

It was an intriguing combination Hagen put together, and through it he was a major factor in the growth of American golf. In the period when he was most active as a golfer, the pro tour was in its embryonic state and paid little in purse money.

Hagen earned most of his money playing exhibitions, some 4,000 18-hole outings from 1914-41 that brought in an estimated $1 million. This was an impressive sum for the time, but what made it all the more so was that Hagen did not perform for preset fees and expenses. He barnstormed, playing to whatever size audience he could draw, usually at a dollar a ticket.

Sir Walter did not restrict himself to playing in established golf country. He also traveled to the hinterlands -- the Dakotas, Wyoming -- where the courses were usually quite primitive and where he had to pull in every golf fan and curiosity seeker within a 500-mile radius.

Hagen satisfied one and all, and he never slowed down the proceedings with dry dissertations on the mysteries of the game. He was the Johnny Appleseed of American golf.

No one can say for certain how many persons Sir Walter inspired to take up golf, but a fair guess is that he corralled one for every dollar he made on the exhibition circuit alone, not counting their sons and daughters.