Fighters' techniques can be classified in three broad categories: striking, grappling and ground fighting. Let's look at each one in more detail.

Striking includes punches, kicks, knee strikes and elbows. Often fighters will learn striking techniques from various disciplines, from boxing to Muay Thai (a Thai style of boxing). The UFC requires all fighters to wear fingerless 4 to 6 ounce gloves and no footwear. Because the gloves are thin compared to boxing gloves (which weigh 8 to 10 ounces, depending on the weight class of the boxer), fighters must be careful not to damage their own hands when throwing punches.

There are restrictions on where and how a fighter may strike his opponent. Fighters can't throw a knee strike or kick to the head of an opponent on the ground, for example. They also can't use a downward strike with the point of their elbows or strike the back of their opponent's head.

Grappling
Some fighters spend more time working on grappling and wrestling skills than striking. A fighter can attempt a takedown on his opponent, meaning he forces his opponent to the ground. You can defend a takedown with a sprawl, where you use balance and leverage to stay standing. Takedowns can be spectacular -- such as a slam or suplex -- or they can be as simple as knocking someone off balance. 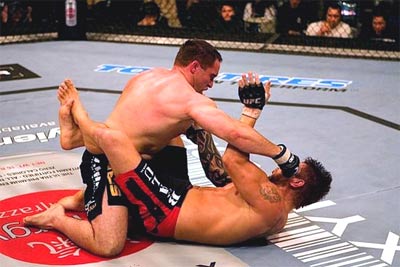 Unlike boxing -- or even most kickboxing matches -- in the UFC, fights continue even if a fighter falls to the ground. Fighters can throw strikes (sometimes called ground and pound) or apply submission holds while on the ground. There are many ways to attack and defend. Usually one fighter will end up on top of the other fighter, and you're likely to hear terms like guard, half guard, side control and full mount. These terms refer to the position of the fighters in relation to each another. For example, if the Fighter A is on bottom and has his legs on either side of Fighter B's hips, Fighter B is said to be inside Fighter A's guard.

For a fighter to be successful in the UFC, he must train in all three techniques extensively. While most fighters tend to focus on particular styles such as wrestling or striking, almost all of them have at least a basic working knowledge of other techniques.

In the next section, we'll look at how winners are decided in UFC matches.