Browse the article Taekwondo: The 'Sport' of Mastering Self-Control 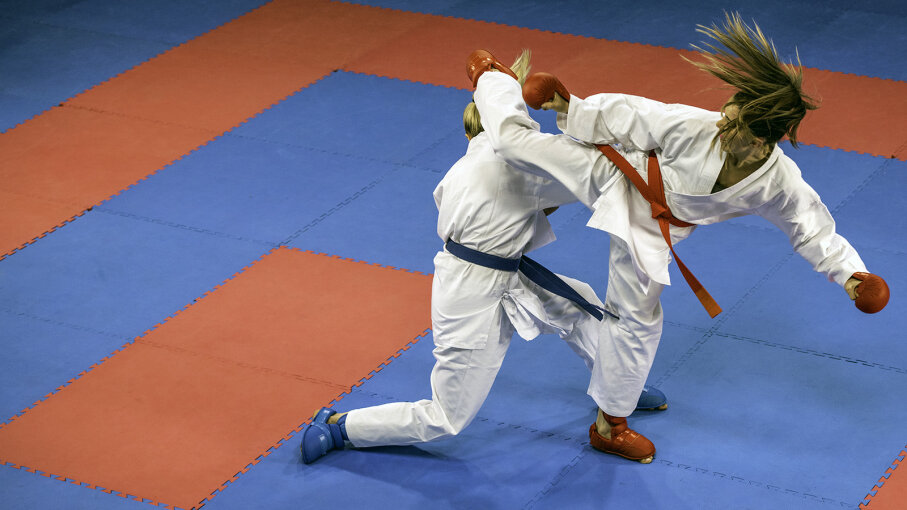 The first bit of wisdom to pass along about the fascinating and almost absurdly intricate Korean martial art of taekwondo is this: It's pronounced TAY-kwon-dough. Not TIE-kwon-dough. TAY.

That might be the easiest lesson ever about taekwondo, which has been part of the Olympics since 2000 even as traditionalists fiercely insist it's something much more than mere sport. To the traditional, committed practitioner of taekwondo — to a taekowndoist — it is nothing less than a way of life.

"It's a skill ... it's an education. It's not just simply entertainment," Grandmaster Doug Cook, the president and CEO of the United States Taekwondo Association, says. He owns and operates a dojang in Warwick, New York, where he teaches traditional taekwondo and the development of a personal ki, or internal energy. "When people begin, they think they're just going to come in and do a few kicks and punches. Like kickboxing. Just kind of lose some weight. But they realize pretty quickly that the techniques require a lot of effort and a lot of practice, and they need to come consistently.

A Brief History of Taekwondo

The term taekwondo — remember, it's TAY-kwon-do — is often translated many ways. Simply, it is defined as "striking with the foot and hand." The suffix do is used to define a way or a discipline. Or, as some people see it, a way of enlightenment, a way of life.

The martial arts — which began as a means of self-defense, growing through hand-to-hand combat on battlefields — can be traced back thousands of years. Taekwondo's roots are much more recent.

After the Korean peninsula was invaded by Japan in World War II and was bombarded by foreign forces in the Korean War, the martial arts in Korea — split into many different schools and styles, and influenced by karate, judo and what we know as kung fu, among other martial arts — looked to unify. The various factions finally settled on taekwondo, a term not coined until 1955 and not accepted until the newly formed Korean Taekwondo Association did so in 1965.

Since then, some revisionist history touting taekwondo's ancient Korean roots — told by nationals looking to make a claim for a true Korean martial art — has taken hold. But it's not all accurate.

From a 2016 paper written by two professors at Youngsan University in Yangsan City, South Korea, Udo Moenig and Kim Minho, in the journal Acta Koreana:

In the last two decades, taekwondo's historical claims have been universally questioned, but still, the tales of taekwondo's indigenous origins from Korea persist. The narratives have been propagated by the taekwondo establishment and popular culture as taekwondo's tradition for such a long time that it is difficult to correct the storyline. Moreover, Korea's sensitive political relationship with Japan, which is tied to historical and territorial disputes, nationalistic sentiments, and national pride, makes it almost impossible for the Korean taekwondo community to change the narrative and finally acknowledge taekwondo's roots in Japanese karate.

How Taekwondo Differs from Karate

Because of karate's unmistakable influence on taekwondo, the two are often confused. They are both considered hard-style martial arts, Cook explains, as opposed to soft-style martial arts like aikido or tai chi.

"Soft-style martial arts are generally used, in a sense, where you redirect an opponent's negative energy, or belligerent energy, and throw them off balance and then apply joint locks or throws. You're blending with your attacker," he says. "In hard-style martial arts, you're doing striking, kicking and punching, fast and hard, penetrating power, rather than just blending."

Many people know taekwondo only as an Olympic oddity. In that type of competition, the goal is to land as many kicks and punches to the torso and head of the opponent. At the end of three rounds, the player with the most points wins.

But the drive to make taekwondo more accepted internationally — often by those who want to lift Korea's worldwide image through recognition of the sport — may be hurting traditional taekwondo.

To traditionalists like Cook, the sport of taekwondo is almost unrecognizable.

"The way the sport of taekwondo is executed these days is really an atrocious attempt at sport. They just stand there and jump up and down for five or six seconds, or 30 seconds, as much as that, doing nothing. And then one person will try to get a kick in," says Cook, who has authored four books on taekwondo. "All the really skillful techniques that have been carried across taekwondo for decades have been forfeited now just for simple little taps. It's what we call 'foot tag.'"

Rather than settling for points or trying to win at all costs, those who practice traditional taekwondo follow five tenets:

Those tenets, the belief that taekwondo is built on more than winning a medal, is what separates sport from traditionalists. "None of us, probably, will ever face hand-to-hand combat on the battlefield," Cook says. "So when we're learning this, people sometimes ask, 'Why am I doing this?'

"Physically, you will be able to defend yourself and your loved ones. But, really, what it's doing is building up that character. And that's what you get in the 21st century as a modern-day warrior."

NOW THAT'S INTERESTING
Aside from taekwondo, judo — based on Japanese jujitsu and once practiced by samurai — is the only other martial art now represented at the Olympics. It began in the 1964 Games and has been in every Summer Olympics since 1972. (Women have participated since 1982.) In the 2020 Games in Tokyo, karate will make its debut.