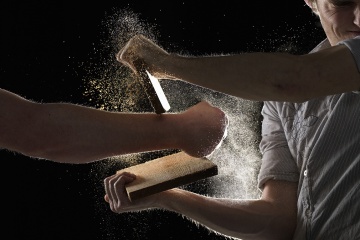 On the island of Bawean in ancient Indonesia, so the story goes, a woman named Rama Sukana was washing clothes in a brook when she noticed monkeys fighting in the trees nearby. Fascinated, she took careful note of their combat techniques and began practicing them herself.

Honing her sparring methods took time, and she ended up getting home much later than anticipated. Her husband was pacing back and forth waiting for his dinner and was too crazed with hunger and indignation to listen to her explanation. Instead he attacked.

Rama Sukana immediately went into monkey combat mode and neutralized him. In fact, she neutralized him so often that he eventually got tired of attacking her and asked if she could train him in the new technique of hand-to-hand combat that she'd invented. Thus was borne the Indonesian martial art known as pentjak silat [source: Blackbelt Magazine].

In Japan, in the 16th and 17th centuries, the government was worried about armed uprisings and decided the logical thing to do was to confiscate all weaponry. However rebellious they might be, peasants wouldn't dare confront blade-wielding Samurai with their bare hands. But the peasants had other things to worry about. Now that they were disarmed, how were they supposed to protect themselves from thievish bandits? Their answer was karate, which means "empty hand" [source: Biryukov].

Perhaps it's no accident then that these are the legendary origins of two of the martial arts most closely associated with the practice known in Japanese as "tameshiwari," the miraculous-looking feat of breaking boards, bricks and concrete slabs with bare hands. Borne of the need to defend against domestic abuse and lawless violence, pentjak silat and karate were designed to tip the scales in favor of the vulnerable. In asymmetric fighting, the weaker combatants must use unusual methods to defend themselves. Tameshiwari provides an astonishing demonstration of how such methods can result in the practitioner wielding seemingly impossible power.