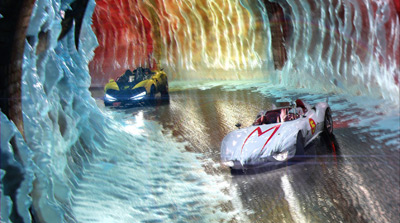 Speed Racer and his tricked-out Mach 5 turned millions of kids onto Japanese anime when the cartoon series "Mahha GoGoGo" -- also known as "Speed Racer" -- premiered in 1967. Its 52 episodes have had a cult following ever since. Though its animation is primitive by today's standards, "Speed Racer" was a pioneer for its time and made an indelible impression on many who grew up with it, including the duo behind the "Matrix" films, Larry and Andy Wachowski.

The directing brothers, known for bringing an innovative approach, keen visual sense and cutting-edge technology to their projects, have brought the 40-year-old franchise into the 21st century with eye-popping visuals, high-octane action and a welcome reinvention of the term "family film."

How did they make it look so cool, while bringing it in on time and on its $120 million budget? Well, we won't find out from the Wachowskis; they're known for not doing interviews. But the talent in front of and behind the camera were more than willing to reveal the brothers' creative methods and give detailed insight into the making of the movie.

Arguably, the most famous characters in "Speed Racer" are the cars. Although creators designed more than 100 cars for the film, the only full cars made were the Mach 5 (Speed's car) and the Shooting Star (belonging to Racer X). But even those didn't actually work. All the moveable cars were computer generated, according to John Gaeta.

"We had all sorts of bizarre-o shapes, funny cars in a way, but with jet engines in them. The wheel is captured in an enclosure from above that allows it to not be encumbered by an axle. We call them T-180s," says Gaeta, who designed the cars with inspiration from skateboard technology. "We wanted to go into the realm of Tony Hawk with this."

Another striking aspect of "Speed Racer" vehicles are the jump jacks, "akin to the world's most powerful pogo sticks," says Gaeta. "They can rocket 3,000 or 4,000 pounds of car into the air at high speed. The wheels and the jump jacks can be controlled in unison or separately, so if I wanted to fire just the left side jump jacks the car would roll up and to the right. And if I wanted, I could go end over end."

Emile Hirsch as Speed Racer in one of the many racing scenes in the movie.
Photo courtesy of Warner Bros. Pictures

Talk about tenacity: producer Joel Silver acquired rights to "Speed Racer" nearly 20 years ago, and never gave up on getting the movie made -- despite many false starts with several scripts written and filmmakers attached. One abandoned live-action version called for an all-chrome car that would have cost $1 million to make. Because it was less expensive, animation was clearly the way to go, but Silver wanted to wait until the right technology existed so he could get it right.

As it turns out, the "Speed Racer" cartoon was the Wachowskis' first exposure to anime, and they've wanted to remake it for years. Silver had them create a five-minute previs -- or previsualization -- video of a race scene to show to Warner Bros. in December 2006. The studio liked what they saw and told the brothers to "take a shot."

Silver worked with the directors on the "Matrix" trilogy, but notes this is the first film the Wachowskis made that had a decidedly family feel to it. They wanted their families -- nieces, nephews, all young people -- to be able to see the film.

In the story, the manipulative, greedy and corrupt head of Royalton Industries (Roger Allam), infiltrates the World Racing League in order to fix races and boost his own bottom line. He first tempts, then coerces and threatens Speed. "The corporations are trying to crush him, use him for his skills to make them money, but he doesn't want to play ball," says the film's star, Emilie Hirsch.

Hirsch, a childhood "Speed Racer" fan who re-watched all 52 episodes to prepare for the role, admits to being "a hardcore geek" who has seen the "Matrix' films "an unhealthy amount of times." The chance to work with the Wachowskis was a major lure for him, as it was for his co-stars.

Susan Sarandon confesses she had no idea what the directors were talking about when they explained their plan for the movie to her. The computer generated action sequences and green screen technology were a little bit over her head. But she notes that she was excited to work with them and enjoyed filming the movie.

Nevertheless, the actors had to trust that the Wachowskis would be able to pull it off. "Going into it this was one of the most terrifying experiences ever," confesses Matthew Fox, who'd grown up on a Wyoming ranch without TV and was unaware of 'Speed Racer.' There are so many ways that you, wrapped in a leather suit, can be very bad," he admits. "But I had complete and utter faith in the Wachowskis making me look good."

It helped that the directors made an effort to give the cast as much information as possible. Sarandon notes the directors had pictures to illustrate their vision from day one. And Ricci says the art department was willing to answer questions and had an open-door policy about the production design. Read on to find out how the green screen and a computer took the production design to a finished product.­

To achieve "Speed Racer's" unique retro-futuristic, heightened reality look, all the live-action sequences were shot on a soundstage against a green screen, so that it could be composited together with computer-generated or computer-manipulated material. The set reminded John Goodman of a bare bones Off-Off Broadway production of "Our Town" he once did in a church basement without scenery or props, and he says it helped him focus even more on his acting.

But the close quarters got to Hirsch. He and the other drivers spent many hours inside car cockpits attached to a moving platform called a gimbal.

"They're slamming you around in this simulator, and it's hot and there are lights on you and you can't move because you're strapped in. You get frustrated to the point where you want to rip the thing apart," says Hirsch, who got his share of bruises. "Matthew Fox got it worse, though."

At one point, Ricci was tossed around so much she got motion sickness and had to step out to get sick. She insists she had a good time in the cockpit, anyway.­

Shooting in the controlled green screen environment actually saved money, notes Silver. "And it was all shot digitally. It's a matter of years when film won't be a factor anymore," he predicts. "It's going to make it a lot easier to make movies."

Nevertheless, he proclaims "Speed Racer" was a "technical nightmare" to achieve. After all, there were about 2,000 effects shots that were created or manipulated via computer software.

"Every frame in some aspect has had some level of beautification or texture or color added to it in order to fit it into the universe," says VFX supervisor and "Matrix" movies alumnus John Gaeta, noting that most shots underwent "the most sophisticated digital color grading ever."

Gaeta first strategized about the project with the Wachowskis over a few months starting in May 2006. While they wanted to be true to the spirit of the original cartoon, they decided to "go the full-blown, stylistic, expressive anime route, and needed to explore what action looks like and create a balance between reality and spectacle."

The cars weren't the only acrobatic elements in "Speed Racer"; several actors were called upon to do some high-flying fight stunts. Matthew Fox completed all of his stunts himself. And Emile Hirsch enjoyed the training sessions with stunt coordinators Chad Stahelski and David Leitch, veterans of the "Matrix" flicks. But John Goodman was apprehensive about the physical stresses.

"My knees and shoulder are pretty heavily riddled with arthritis," he explains. "When I'm working on a stunt fight I've got to admit to myself that I've got to tone it down a bit because somebody else could get hurt."

The cars and the background scene were all created digitally.
Photo courtesy of Warner Bros. Pictures

Using extreme sports and video games as inspiration, the creative team set about reinventing the sport of racing with fewer rules and constraints.

"We wanted Formula One cars to be able to move at the speed of sound and navigate these super tracks and be forced to do incredible acrobatics to avoid demise, all this while your adversaries are trying to knock you off the track any way they can," relates Gaeta.

Besides more than 30 minutes of racing footage, there's a ­computer-generated city, Cosmopolis, "and many shots in what we call 2½-D. It's a layering technique where we composite locations we've shot around the world. We would shoot exotic locations, add extra colors and details, and slice and dice it in post-production so that it looks similar to cell animation." Mountain, desert, and party mansion scenes in the movie are examples of this technique. The result: racing surfaces that look like ski slaloms combined with roller coasters taken to the extreme.

Gaeta and co-supervisor Danny Glass oversaw an in-house team, called Exhaust, of 20 people who created between 300 and 400 shots for the film, mostly photo anime effects in live action scenes. The rest were divided between a dozen effects houses: Digital Domain created on-track racing scenes, Sony Imageworks was responsible for mountain race sequences, and BUF in Paris did much of the rally racing, Cosmopolis and Royalton's factory. Other contributors included ILM and Evil Eye Pictures.

Digital work got underway a year before principal photography. The actors began in the summer of 2007, and continued through April of 2008. During editing, a screening room at the Warner Bros. lot was turned into a VFX editing room.

"All the digital effects from all over the world are e-mailed in Quicktime, and we have a person communicating with each vendor," outlines Silver. The Wachowskis review each shot as it comes in, and the liaison sends notes back to the vendor. "Then there's another VFX review three hours later, and so on."

Also in post-production, the film was converted to an IMAX format to open simultaneously around the country. There had been discussions of a 3-D IMAX version, but it was decided that it was too time consuming and not enough properly equipped theaters existed to make it worthwhile. The sequel, if there is one, may be done in 3-D. And all signs point to a sequel.­

Will "Speed Racer" be the Wachowskis' new trilogy? They certainly seem open to the idea, according to the film's stars. Ricci, sad to leave the set and the story behind, asked the directing brothers to write the sequel. Their response: "We're going to. Don't worry."

"They were as sad for it to be over as we were," relates Ricci.

To jump in the story and around the track, check out the movie. In the meantime, see the links on the next page to get more information.

Moviegoers can extend the "Speed Racer" experience via the video game version simultaneously released for Wii and Nintendo DS systems (a PlayStation 2 version will be out alongside the movie DVD in the fall). The video game isn't being released for PlayStation 3, PSP or 360. Players compete in World Racing League competitions against up to 19 other racers, including Speed, Trixie and Racer X. Emile Hirsch, Christina Ricci and Matthew Fox voice their film characters in the game.

Manufacturers are hoping to cash in big with movie tie-ins that include clothing, accessories and toys, among them cars, Hot Wheels sets and action figures from Mattel.