The Origins of Skateboarding 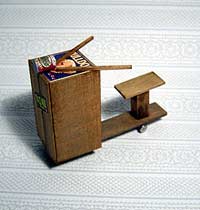 The skateboard's earliest ancestors were homemade, wooden scooters ridden by kids in the early 1900s. To make a scooter, all you needed was a two-by-four, some nails, a produce crate and some roller skates -- a far cry from the sleek aluminum scooters kids ride these days. Kids built their scooters by nailing the steel roller-skate wheels onto the bottom of the two-by-four and the crate to the top. It served as the scooter's neck. After attaching another piece of wood to the top of the crate for handles, the scooter was complete.

Kids continued to ride these scooters into the 1950s. How they made the scooters changed over time, but the most drastic change came when children began removing any sort of handles all together, and rode the wheeled two-by-fours hands-free. With that, the first skateboards were born and their popularity soared among young people.

It didn't take long for manufacturers to take advantage of the growing phenomenon among America's youth. The first manufactured skateboard found its way to store shelves in 1959. And in 1963 professional-grade skateboards appeared on the market, along with teams of pro-riders to demonstrate them.

Skateboarding quickly found commercial success, aptly carving a niche into the fad world occupied by hula hoops and yo-yos. But too little development and innovation went into those first boards: they still had steel wheels, which made for an uncomfortable and dangerous ride. Eventually skateboards were made with clay wheels, which made riding smoother and more enjoyable, but they still weren't very safe.

Clay wheels lacked the traction needed to prevent riders from getting injured. At that time, only a small number of skateboard manufacturers made higher-quality wheels, and they were expensive. Because they were cheaper to manufacture, clay wheels remained the industry standard. The result was a flood of injuries, which gave skateboarding a bad name. Police chiefs discouraged retailers not to carry skateboards anymore. And when reports of fatal accidents came in, cities all over the United States banned them.

In 1965, after half a decade or cultural prominence, skateboarding virtually died over night. Though, not everybody gave up on skateboarding. A select few carried on, but their numbers weren't enough to sustain the sport's popularity. Retailers withdrew their orders and left manufacturers broke and with a surplus of unsellable skateboards.

We'll look at the skateboarding boom in the next section.

Vert skating requires the right surface -- namely a ramp, half-pipe, bowl or other slope. These are prominent features at skateboard parks, but skating enthusiasts often choose to build ramps in their own backyards. Most of the time, these home-built ramps use wood supports with a plywood surface and are based on plans either purchased or downloaded for free from the Web. Specialty skateboard surfaces are also available for people who want their ramps to be waterproof or more durable, or who want a ramp that has a different feel from plywood.