From Mall to Mainstream 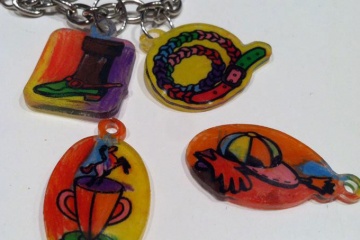 Some Shrinky Dinks kits come with designs already printed on the plastic. All you have to do is color them in and pop them in the oven.
Image courtesy Brayden Mooney

Although craft event organizers weren't keen on Shrinky Dinks kits, Morris and Bloomberg didn't give up. Instead, they set up a booth at a local shopping center. To hook passersby, they brought along a toaster oven and conducted live demonstrations of their product, which was now officially called Shrinky Dinks. People were immediately intrigued, and within four months, Morris and Bloomberg had sold more than $50,000 worth of their kits under the name K & B Innovations. In today's cash value, those ladies had already hauled in a cool quarter of a million dollars.

With those kinds of sales, it was no surprise that they caught the attention of a local toy distributor, M.W. Kaasch Company, which agreed to manufacture and distribute Shrinky Dinks.

In 1981, Bloomberg decided that she'd had enough dinking around. She quit the business and put her notoriety to use, running for local office and eventually becoming the mayor of Brookfield, Wisconsin. That left Morris in charge of the Shrinky Dinks empire.

Licensing agreements came and went, and Morris decided to try a different business model. Instead of focusing on licensing, she shifted to supplying materials. Now, all companies that want to use the Shrinky Dinks name are required to purchase the plastic directly from K & B Innovations.

Since its inception, Shrinky Dinks has appeared in 400 different products and been sold in more than 40 countries. In all, the company has sold about $150 million worth of those plastics kits.

Now that you know the story behind the Shrinky Dinks enterprise, it's time to pick apart the science of why this one type of plastic has such strange and wonderful properties in the presence of heat.