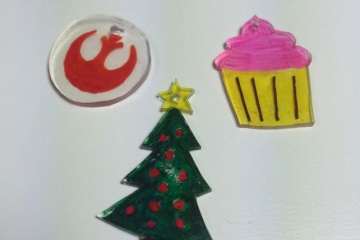 Shrinky Dinks has been around for more than four decades, and the legend began in the kitchen oven at a private residence in Brookfield, Wisconsin. It was 1973, and Cub Scout moms Betty Morris and Katie Bloomberg were searching for crafting ideas for their local troop.

They stumbled upon a craft book demonstrating a fun trick – use a permanent marker to draw a picture on a plastic food container lid and then pop the lid into a warm oven. After a few minutes the plastic curled, shrank and then flattened into its original shape ... only much smaller and more rigid.

It sounded like just the kind of project that would appeal to Boy Scouts. The women figured the kids would get a kick out of making plastic Christmas tree ornaments.

Getting enough of the plastic for their project, though, proved to be a challenge because the material was generally sold in bulk to manufacturers. Morris called a plastics company, which told her that she'd need to place a minimum order of 1,000 pounds. She requested a dozen sample sheets instead, never intending to actually buy half ton of the stuff.

But a funny thing happened during their ornament project. The Boy Scouts had a crazy amount of fun playing with the plastic. So much fun, in fact, that Morris and Bloomberg decided to try and sell the plastics as a crafts kit targeted at children. Each woman rounded up $600 (a total of more than $6,000 after accounting for inflation) and they bought an order of the plastic.

Then they assembled the $2 kits by hand and began looking for places to sell their wares. They originally considered arts-and-crafts shows, but the organizers of those events required finished products, not kits for making art. After some thought, they tried a different approach, and, as you'll see, it paid off.