The Last Battle: Serenity vs. the Reavers 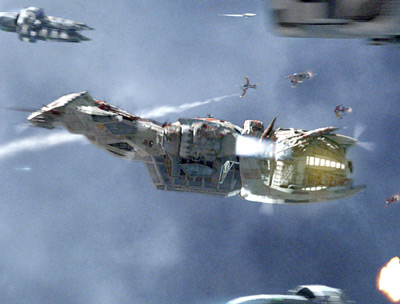 The big battle later in the film involved 200 different spacecraft and posed a different sort of challenge. "Reaver ships are cobbled together and no two look alike," explains Peristere. "We had to be creative. We took parts off ships and reapplied them in different ways and shapes, with digital tool kits. We made ten ships look like 50."

Having the camera take a single point of view for that sequence also saved some cash. "In traditional coverage in CG, you might have 10-12 different angles of the battle, but we had what we called our virtual dogfight camera," Peristere says. "We had our animators pretend they were a chase plane following Serenity and their goal was to keep Serenity in frame as best as they could while missiles, vehicles and obstacles get in the way. As a result, we have a frenetic, high-energy chase that's quite unique in terms of visual effects style."

Peristere says the roughly 432 effects shots in "Serenity" doubled their original calculation, but did not break the allocated $7 million budget. "We constantly shifted money around and changed the complexity with Joss so that we could accommodate the best movie for the money that we had. We moved a lot of money around to make things work. Joss wasn't devastated when he had to lose a shot as long as it told the story."

Whedon's TV background helped him "know what you can have and what you can't, and never being indulgent. You choose your battles, and you shoot just what you need. I don't build a wall if I'm not going to see it. I know exactly what my perspective is before I shoot. Plus," he continues, "I had actors who had been workshopping the characters for a year and a half. So we were really able to save an enormous amount of time and just put every dollar on the screen. And none of us were working for a lot of money so there was zero overhead."

But "Serenity" isn't limited to Reavers and space battles. Next, we'll look at the training and costuming that went into making the movie's characters real.

As for Serenity herself, Whedon insisted that the ship not receive a major makeover in her transition to the big screen. "But at the same time Joss realized that if we were to throw Serenity on a 60-foot screen the way that she was on the TV show her paint job would fall apart, because the camera is going to get up close and personal with every facet of the ship," says Peristere, "We needed more detail and structure."

Adding things like rivets and details took about 12 weeks. "When we were done, Serenity ended up looking like Serenity but sharper and cleaner and bigger. If you're a fan of the show you're not going to be disappointed. The flowers in the kitchen aren't the same, but the doors are the same doors. I'd kept one of the doors at Zoic and it was recreated for the movie."

For the actors, stepping onto the set "was like coming into your living room and your mom rearranged all the furniture and things aren't where they were but you're still home," says Morena Baccarin, who plays Registered Companion Inara. "It felt like we picked up right where we left off, sort of."