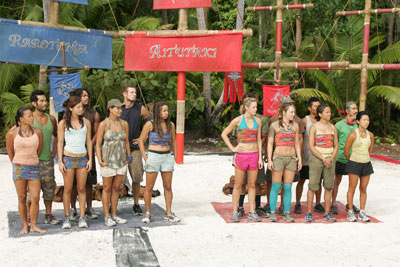 Contestants get ready for a challenge on Survivor: Cook Islands in 2006.
Bill Inoshita/CBS Photo Archive via Getty Images

In 2000, CBS picked up a new reality show called "Survivor." The decision might have had something to do with another looming writers' strike, the success of similar shows in Europe, or the ever-rising cost of producing sitcoms and dramas -- or maybe it was a combination of all of these things. No matter the reason, it ended up being one of the most successful TV moves in recent history. The "Survivor" concept had been created by British producer Charlie Parsons almost a decade earlier, but it was Mark Burnett who brought it to American television. Burnett had unsuccessfully shopped the idea to several networks (including CBS) before CBS picked it up.

"Survivor" assembles 16 to 20 strangers (plus host Jeff Probst, camera crews, producers and various administrative personnel) on a remote island with little to no food or supplies. The contestants are divided into "tribes" upon arrival, and the show revolves around the competition created by a series of challenges. The contestants vote one person off the island every week until only two remain, one of whom wins $1,000,000.

Burnett is considered by many to be the instigator of the reality TV show revolution, but he continues to refer to "Survivor" as an "unscripted drama" -- not necessarily a reality show. The first season aired in the summer of 2000 and garnered one of the largest audiences in CBS's history. Other networks took note and soon, clusters of reality shows began appearing on every channel.

Some of the shows that followed in the wake of the "Survivor" success were "Big Brother," "The Mole," "The Amazing Race" and "The Bachelor." But how "real" are they? We'll try to get to the bottom of it on the next page.

It was probably only a matter of time before mock-reality shows started appearing on the airwaves. "The Office" is probably the most recognizable show in the reality-spoofing genre -- the workplace mockumentary hopped the pond to the United States in 2005 after a short but very successful run in England. Other current reality-like sitcoms include "Trailer Park Boys," "Drawn Together," "Reno 911" and "The Flight of the Conchords."