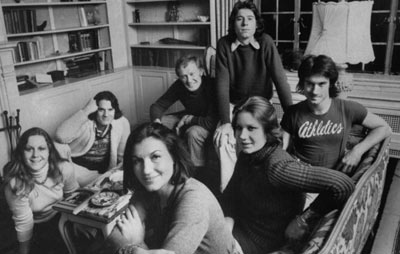 Many consider An American Family to be the first reality show.
John Dominis/Time Life Pictures/Getty Images

While much of reality TV in the 1960s and '70s continued to revolve around game shows and amateur talent, there were some changes. Merv Griffin created several new game shows, including "Jeopardy!" and "Wheel of Fortune." Chuck Barris also arrived on the scene, inventing a whole new type of game show. "The Dating Game," which premiered in 1965, was shot in front of a live studio audience and featured three bachelors or bachelorettes vying for a date with a contestant on the other side of the set. It has spawned dozens of dating shows. Capitalizing on the success of "The Dating Game," Barris went on to produce other reality shows, including the popular amateur talent series "The Gong Show."

Another type of reality show premiered in 1973 -- a 12-episode documentary series called "An American Family." It captured the day-to-day lives of the Loud family over a seven-month period. "An American Family" was groundbreaking, showing the Louds' marital problems and not shying away from the eldest son Lance's openly gay lifestyle. TV Guide considers it the first reality show.

In 1988, TV writers staged a 22-week strike that greatly affected network programming. Several networks were already committed to running one reality show in their season's lineup, but channels like Fox resorted to reality TV during and after the strike. During this season, Fox premiered "Cops," which became one of TV's longest-running shows (it still airs every Saturday night). The show follows police from around the country, filming real response calls and arrests. "America's Funniest Home Videos" and "America's Most Wanted" also premiered around that time and are still going strong.

The next big shift in reality TV came in 1992, when MTV premiered "The Real World." MTV paired an ex-soap opera scribe, Mary-Ellis Bunim, with Jonathan Murray, who had a background in news and documentaries, and commissioned them to write a hip soap opera for the MTV generation. They did, but when they flew it by the studio execs, it was branded too expensive. So Bunim and Murray asked if they could try it without a script and actors. When MTV gave them the green light, they auditioned hundreds of 18- to 25-year-olds and put together a cast of seven. Then they filled a New York City loft with cameras, producers and editing crews and filmed the group for three months. The immediate (and ongoing) hit spawned "Road Rules" -- and countless "Real World/Road Rules Challenge" shows.

Eight years later, "Survivor" would change the landscape of network TV. Read on to learn more.