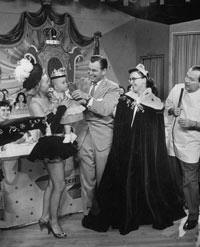 Before there were shows like "Ice Road Truckers" and "A Shot at Love with Tila Tequila," there was "This is Your Life." It originally broadcast on the radio in the late 1940s and made the switch to television in the early 1950s. "This is Your Life" was reality TV because it presented the story of a real person's life -- and relied on the participation of real people, who were shot in front of a live audience or filmed on location. It didn't matter if the subject was Joe Schmo or Johnny Cash -- they were all surprised by host Ralph Edwards and his camera crew (they famously surprised Cash on stage in the middle of a concert).

"The Original Amateur Hour" crossed over from radio in 1948. This talent show featured acts that performed for a voting audience. The act with the most votes was invited back the next week. This might sound familiar -- "The Gong Show," "Star Search," "American Idol," "America's Got Talent" and "Dancing with the Stars" are all based on this formula.

Another 1950s radio crossover was "Queen for a Day." It involved four female contestants who competed for household appliances by describing how difficult their lives were. The studio audience determined the queen via an applause meter. Current reality shows like "10 Years Younger," "A Makeover Story" and "Deserving Design" are its direct descendants.

Art Linkletter and Allen Funt brought practical jokes, stunts and hidden surveillance to TV in the '50s. Radio's "Candid Microphone" became "Candid Camera," with Funt hosting and performing practical jokes. The gags and stunts were contrived, but the unsuspecting targets' reactions were very real. Audience members on Linketter's "People are Funny" participated in outrageous skits and gags. "Fear Factor" later took this idea to the nth degree, and "Candid Camera" passed the torch to "Girls Behaving Badly" and "Punk'd."

Other early reality shows included "I'd Like to See" (1948) and "You Asked for It" (1950), which required audience members to write in or vote for what they'd like to see on the show. The picks were often filmed in a documentary or clip-type style -- shot on location and presented to the audience with a narrator. Shows like "Real People" and "That's Incredible" incorporated similar techniques and were popular in the late 1970s and early '80s.