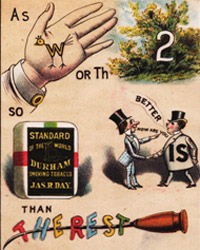 In 1958, NBC introduced the game show "Concentration," based on the popular children's game also known as Memory. In the children's game, pairs of matching cards are placed face down in a grid. Each player gets to flip over two cards. If the cards match, the player keeps the cards and goes again. If they don't, the two cards are turned back over and all players must remember where each card is located so they can make future matches. The twist introduced with the game show is that as each matching pair is removed, a puzzle is slowly revealed underneath. For many Americans, the show served as their first introduction to rebus puzzles.

The classic definition of a rebus puzzle is a pictogram representing a common word or phrase. The word rebus comes from the Latin phrase "non verbis, sed rebus," meaning "not by words, but by things" [source: Dictionary.com]. The solution to the first part of the advertisement pictured reads "A bird in the hand is worth two in the bush."

Interestingly, some written languages, like Egyptian hieroglyphics and even Chinese are based on the rebus principle [source: Noth]. Linguists believe that the ancient roots of Chinese probably began with characters that looked like the object they represented. Over time, the same characters began to be used for words that sounded the same as the original (homophones). For example, a character that looks like an eye could also be used to represent the word "I." Over the centuries, Chinese characters evolved until they no longer resembled those original drawings.

Today, teachers and language therapists use rebus images to help people who are learning English as a second language. By inserting images next to new vocabulary words or asking students to draw their own images, students can make quicker associations with new words [source: Connected Mathematics Project].

In addition to the classic pictogram type of rebus puzzle, there is also a more modern version that treats words themselves as a sort of image or object. In these types of rebus puzzles, words are arranged, jumbled, multiplied and redirected in order to convey a new meaning. For example, here's the phrase "down to earth" as represented by a modern rebus puzzle:

Since these types of rebus puzzles are a little more challenging to solve than the classic pictogram version, we're going to give some more examples -- along with some helpful tips for solving them -- on the next page.

Rebus puzzles are fun and challenging brainteasers. The first tip for solving rebus puzzles to is to know a large collection of common words and phrases. Without a baseline knowledge of famous sayings, quotes, literature, clichés and even popular culture, it will be very difficult to solve rebus puzzles. Most adults will do just fine, but some younger puzzlers might not be familiar with a phrase like "up the creek without a paddle" or the TV show "All in the Family."

The next tip for solving rebus puzzles is to think about the words in the puzzle as objects, not just words. Consider how the words (objects) have been manipulated. Are they written in very small or very large letters? Are they written vertically going up or down? Is one word over or under another word? Is one word inside the other? Is a word repeated a specific number of times? All of these observations will give you clues to the meaning of the rebus puzzle. Let's look at some examples, starting with the one from the previous page:

If you just read the words, the puzzle says "Earth Earth." But consider the direction of the words. They're written vertically instead of horizontally. You could say they're written "down." Then there's the fact that Earth is written two times. With the clues "down," "two" and "Earth," it isn't long before you have your solution: "Down to Earth." Let's try another one:

"Pawalkrk" isn't a word, so let's look a little closer. Whenever you see a word that looks like gibberish, try to break it into smaller words. In this case, the word "walk" is embedded inside the word "park." Placing one word inside another is a popular rebus puzzle trick. Once you realize that there's a "walk" in the "park," you have your solution: "A walk in the park." Let's look at one more example of positioning:

Over and under, right and left, next to and beside are all popular rebus puzzle clues. Try saying the position of the words out loud as you read them. "Arrest over you're." That isn't a phrase. "Arrest above you're." Not quite. "You're under arrest." Bingo!

Blanks, spaces and unusual separations are also very popular rebus puzzle clues. Try these two puzzles, using two different words for the empty spots. Scroll down to the bottom for the solutions.*

For lots more tips and information on family-friendly games and entertainment, take a look at the HowStuffWorks links on the next page.

Crossword puzzles, Sudoku and other brainteasers have been touted as effective ways to "stretch" your brain and improve overall cognitive function. While some researchers have found connections between reasoning exercises (finding the next number or word in a series) and improved cognitive function, a 2010 study published in the journal "Nature" found no link between brainteasers and improved brainpower. Participants improved on the specific brainteaser, but those improvements didn't cross over into everyday cognitive tasks like remembering one's grocery list [source: Harrell].