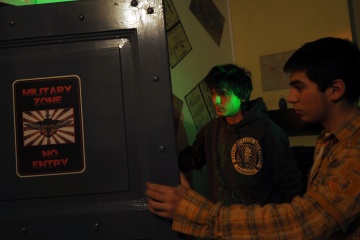 In order to make the experience more real, escape rooms often have some kind of theme and narrative. If you think about it like a book, the theme is like the setting, which places the story in a particular time and place. The narrative is like the plot, which directs the story itself: In this case, it explains why you're solving all these puzzles. In an escape room, the theme is often evident by the way the room is decorated, while the narrative is related through a back-story, told to players when they first enter the room. While not all escape rooms have a theme or a narrative, these elements can really help make players feel immersed in the story.

When it comes to creating a theme, venues can be as imaginative as they want. Most themes however, tend to center around a particular time and place during the past 300 years or so. Escape the Room Arizona, for example, has a room that's a bank in the Old West. Mystery Quests in Colorado has a room set in Italy during World War II. Others are set in more modern times, like Escape the Room Boston's room, The Office. "Everyone's worst nightmare in real life," the description reads, "you're stuck at work and can't leave."

Another popular theme is horror, which combines the escape room concept with the chills and thrills of a haunted house. One of the most well-known examples of this genre is Room Escape Adventure's "Trapped in a Room With a Zombie," a setup with a zombie chained to a wall. You have to solve the puzzles and escape without getting touched by the zombie, but every five minutes its chain is released another foot! Other themes include fantasy, science and laboratory, future and military [source: Nicholson].

So you're holed up in your office. Why? That's where the narrative comes in. The office room is a great example of the most common narrative: escaping a specific, unpleasant place (see also: prison cell or zombie dungeon). Some narratives don't actually involve any escape at all. Investigating a crime, engaging with the supernatural, defusing an explosive device and carrying out a heist are all potential premises for escape rooms [source: Nicholson].

As you can imagine, trying to escape a prison or defusing a bomb can really reveal one's true self. These personalities are so recognizable to escape room players that the Internet has created lists of them. There's the aggressive player, who runs around the room yelling, or the competitive player who wants to solve the puzzle faster than anyone else. But there's also calmer ones, like the problem-solver, an intelligent player who prefers to solve puzzles alone, and, of course the leader, who's a steady presence and a great communicator [source: The Escape Game Orlando].