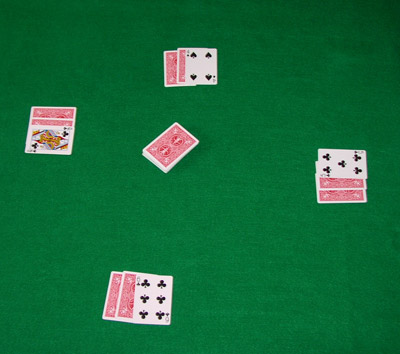 Here is a hand of seven-card stud after the initial deal, also known as third street.

This is another popular tournament game. After the ante, each player is dealt two cards in the hole, and one card face up.

The initial deal (see above) is known as "third street." Subsequent face-up deals are known as fourth, fifth, and sixth streets, respectively.

After the initial deal, there is a betting round. In subsequent deals, three more cards are dealt face up to each player, one at a time, with a betting round between each one. Finally, another card is dealt in the hole to each player. This seventh card is known as "the river."

A game of seven-card stud at the river

There is another betting round before the showdown. Players create the best five-card hand out of their seven cards (there is no board, nor community cards, in seven-card stud).

There are also five and six-card versions of this game, but they are less common.

This game is usually played as high-low split game. That means that the highest hand and the lowest hand will split the pot. Omaha, or Omaha/8, is actually the abbreviated name for Omaha Hold'em, 8-or-better, High-Low Split. It is superficially similar to Texas Hold'em, except that each player gets four cards in the hole instead of two. There is a flop, a turn, and a river, with betting intervals between each, just like in Texas Hold'em.

There are literally hundreds of other variations of poker games, enough to fill an entire book. They include games like Baseball, Indian Poker, and Chicago (see Poker.com: Poker Games to find rules for hundreds of poker variations). But the player who learns the games described here will be able to play at most casinos and many local poker games.