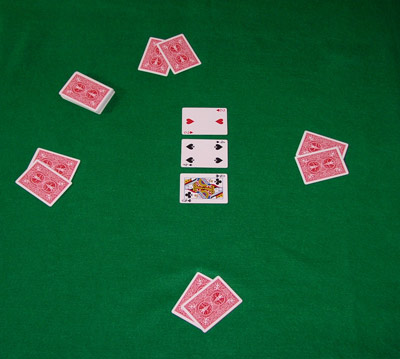 A hand of Texas Hold'em at the flop

At most poker tables, the job of dealing will rotate among the players. At a casino, there will be a house dealer, but the dealer's position at the table will still rotate.

The "dealer" for a given hand will hold the dealer button, or buck. When the hand is completed, the button is passed to the player on the left. The expression "passing the buck" doesn't have anything to do with money -- it comes from poker players passing the dealer button around the table.

This game is what many people think of as "standard" poker. However, Five-card Draw isn't played very much any more, especially at casinos.

In Five-card Draw, each player is dealt five cards face down, followed by a betting round. Then, beginning with the player to the dealer's left, each player may discard any number of cards. The dealer will then deal out that same number to that player. While there is technically no limit to the number of cards a player can draw (up to five), poker strategy would dictate that you should fold if you need to draw more than three, or in many cases, more than two.

After every player has drawn, there is another betting round, followed by the showdown.

This is currently the most popular poker game in the United States. Many large poker tournaments, including the World Series of Poker, are Texas Hold'em games.

Each player is dealt two cards face down. These are your hole cards, hence the expression, "an Ace in the hole." This is followed by a betting round.

Three cards are then dealt face up at the center of the table. This three-card deal is known as the flop.

The face-up cards at the center of the table are known as the board, and they are community cards (they can be used by any player at the showdown). Then there is another betting round.

A fourth card is turned face up on the board. This card is known as the turn. There is another betting round.

Finally, the fifth board card, known as the river, is dealt face up. There is a final betting round before the showdown.

This hand of Texas Hold'em has reached the river.

The object is to create the best five-card hand possible using any combination of your two hole cards and the five cards on the board.