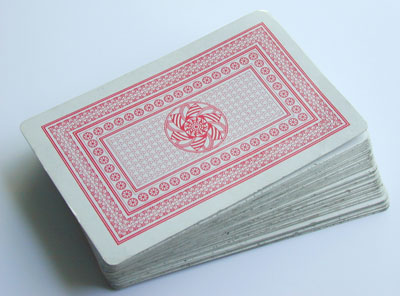 The origins of playing cards and poker are difficult to pin down. There are dozens of theories. Some say playing cards were developed by the Chinese as a variation on dominoes. In Europe, Tarot decks used for fortune telling are an obvious link in the lineage of the playing card. Gaming has been popular in every culture throughout history, so it is likely that different versions of the playing-card deck were developed independently by different cultures at different times.

Early French settlers who came to New Orleans played a card game called poque, which involved bluffing and betting. Persian sailors, at port in New Orleans, taught the French settlers the Persian game called âs, which uses decks of cards comprised of five suits. Most likely, these two games came to be melded together into one, and as travelers spread the game up the Mississippi River, they changed it to suit their own purposes. Con men who plied the riverboats adapted the game, using it to relieve their victims of their "poke," or cash. At some point, this Anglicized version of the word poque became "poker." The first written mention of "poker" was in 1834.

In the 1800s, the game quickly spread to the western frontier. The "wild west" period of American history was a boom time for poker, with a poker table in almost every saloon.

Legendary Las Vegas casino owner Benny Binion decided to host a poker tournament for the best players in the world. In 1970, he held the first ever World Series of Poker. This $10,000 buy-in, no-limit Texas Hold'em game is now televised on ESPN.