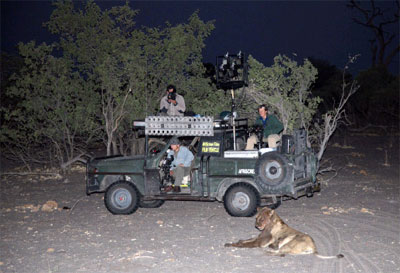 This crew gets a close-up view of an uninterested African lion.
BBC/DCL

In creating "Planet Earth," the filmmakers wanted to capture images that had never been filmed, shoot in locations that no cameraman had ever been to and use equipment in new and innovative ways. The outcome of these lofty goals was a long list of first-time filmmaking accomplishments.

It took three separate trips to Papua New Guinea to find and film the camera-shy bird of paradise. Camera crews rose at four in the morning to get in place before the birds awoke. The BBC team left out fake cameras so the birds would get acclimated to seeing something unusual in their environment. For eight weeks, cameraman Paul Stewart spent 14 hours a day every day in a cramped hideout waiting for the ultimate shot. His patience paid off as he was able to capture the rare blue bird of paradise performing his mating dance for a female suitor.

Most filmed animal hunts are actually many hunts edited together to complete a story. "Planet Earth" strived to film the entirety of an impala hunt by African wild dogs in the "Pole to Pole" segment. To achieve this goal, a heligimbal team worked with ground crews to spot and track the dogs. Once the ground team found a pack, they radioed to the helicopter and the chase was on. The tricky part of filming the hunt was keying in on the right dog at the right time. The long zoom lens on the helicopter rig allows only viewing of small areas, so once the camera is focused on one dog, it's difficult to find another. Thanks to the crew's perseverance, viewers watched with amazement as the dogs worked together in a series of flanking maneuvers to trap a young impala. Even though the impala was able to escape into a river, seeing the hunt from beginning to end told us more about the dogs' hunting behavior than we'd ever known.

The Antarctic team prepares to set out for a long day of shooting in sub-zero temperatures.
BBC/DCL

Sometimes, the locations themselves were firsts. From the record-breaking high-altitude filming of Mount Everest to the hi-def camera work of the Lechuguilla caves of New Mexico, the filmmakers went to any extreme to land never-before-seen images. Underwater cameramen dove through the ice of Lake Baikal, the world's deepest lake at nearly one mile, to capture scenes of the ocean-like life underneath. The lake was so cold, boiling water was poured over the air tanks and regulators to keep them from freezing mid-dive.

The "Planet Earth" team also broke new ground using innovative techniques. The crew used a motion control system to film intricate time-lapse shots of the changing earth. Motion control automates the camera's movement, allowing an extremely slow and steady progression of shots. Time-lapse photography uses an intervalometer mechanism to shoot short bits of film at a set interval over a period of time. No one had ever used these two techniques in tandem before. Shots of the different stages were blended together in the editing process. The results were moving camera shots of a changing autumn mountain landscape, Japanese cherry blossoms in bloom and a sand storm in the Sahara.

In the next section, we'll look at the animal, natural and human dangers the "Planet Earth" team encountered.