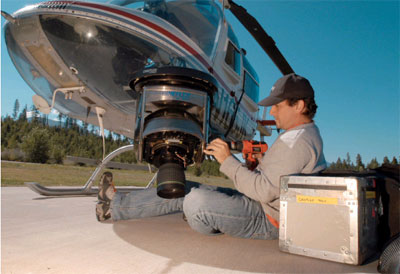 The two most important factors in the success of "Planet Earth" were the equipment and new techniques used. The series was the first nature program to be shot entirely in the high-definition format. The resolution on hi-def cameras produces an image that's remarkable in its clarity and allows for filming in very low light.

The hero of the series was no doubt the heligimbal -- a gyro-stabilized camera housing mounted underneath the front of a helicopter. A gimbal is a support that allows an object to remain horizontal even when tipped. Two gimbals used together create vertical and horizontal stabilization. The heligimbal uses this principle to keep the camera pointed straight and held steady. A cameraman operates the unit from inside the helicopter with a remote control. The heligimbal was responsible for high-altitude footage as well as the overhead shots of the various hunts. Powerful zoom lenses enabled the helicopter to remain a good distance away from the animals.

What about those shots floating slowly over jungle canopies? This was achieved by using a cinebulle to navigate over terrain without the wind created by helicopter blades bending and breaking the treetops. It may sound high-tech, but it's pretty simple -- it's a hot air balloon equipped with a platform instead of a basket. Inventor Dany Cleyet-Marrel used a large fan to steer the unit. This remarkably basic technique produces rock-steady sequences that graze treetops without disturbing them. The one drawback is that it isn't the most responsive aircraft. On more than one occasion the cinebulle flew straight into the trees instead of over them.

Cameramen on "Planet Earth" used whatever means necessary to land the shot.
BBC/DCL

If you've watched "Planet Earth," one sequence that's bound to stand out is the pride of lions hunting and feeding on an elephant -- in the dead of night. Production teams used walls of infrared lights that are detected only by special cameras. To the human and animal eye, it was pitch-dark. The resulting images were crystal-clear and gave us a view of nocturnal animal activity that's never been witnessed before.

Cameramen used waterproof housings for underwater and cold weather sequences. The crew sealed cameras in containers and many times left them alone to be operated by remote control. This allowed technicians to remain a safe distance from the scene. For rare appearances of jumpy animals, cameras were hooked up to motion sensors that would operate the camera only when activity abounded.

The key with to these technologies is in not disturbing the surrounding environment. A shot of the Amazon treetops bending and breaking from helicopter wind doesn't work. And what kind of behavior could we expect from animals if they knew they were being watched in the dark or from above? ­

In the next section, we'll look at some of the unprecedented achievements of "Planet Earth."­