Browse the article Are pedal cars safe for kids? 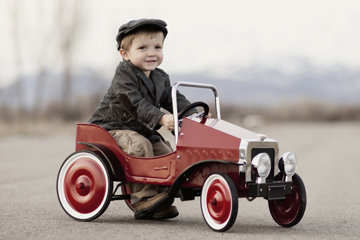 Most hospitals lump pedal car accidents in with bicycles and tricycles for injury reports — and there are a lot more kids on bikes than there are kids in pedal cars.
(Andrew Rich/Vetta/Getty Images)

They say that the first automobile race happened as soon as the second car was built, and it seems that pedal cars came along right after that. Herrs Benz and Daimler filed for their automobile patents in 1886, and the first pedal-car toys were available in the 1890s. And just like real cars, pedal cars were spendy, meaning only well-to-do families had either a newfangled horseless carriage or a pedal car for the kiddies. But in the 1950s and 1960s, as the middle class got some cash, and their kids perfected the art of whining, pedal cars became wildly popular.

For nearly 80 years, pedal cars were built on wooden chassis' with steel frames, which made them sturdy, heavy and durable. Some of these cars can last for decades, and if you've got the scratch to buy a vintage pedal car at an auction, they're perfectly usable. But in the 1970s, manufacturers started using cheap-and-easy plastic for pedal cars — and everything else, too. The end result was significantly lighter pedal cars — vehicles that were a lot easier for little legs to maneuver.

Which brings us (finally, right?) to the safety issue. Pedal cars are pretty dang safe, really. Most manufacturers recommend that peddlers be 3 to 5 years old. Any kid with long enough and strong enough legs (along with the cognitive development to not run into trees or other kids) can work a pedal car. If a kid can steer and pedal at the same time, bonus! He's a regular pint-sized Richard Petty. Pedal cars kick-it-old-school, with no electric parts (no battery) and they have a low center of gravity, too.

But as we all know, everything in the world is potentially dangerous and a lawsuit waiting to happen. To lessen your chances of injury or lawsuits, we'll cover some basic safety tips on the next page. 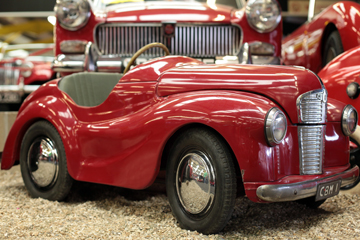 A pedal car at the Haynes Motor Museum is displayed in the Red Room, a collection of over 50 red cars, in Yeovil, England.
(Matt Cardy/Stringer/Getty Images)

Let's just state the obvious right off the bat: A pedal car is not a real car, and it should never be on a real road. It's a little car with a little kid in it. Not even the driver of a tiny smart fortwo car is going to be able to see a pedal car on the street. That's the very definition of accident waiting to happen.

You should also be aware that the brakes are straight out of a "Flintstones" cartoon.The bottom of a pedal car is wide-open, and your kid applies the brakes by just putting his feet down. However, unlike Fred Flintstone, your kid should be wearing shoes with grippy rubber soles for safe braking — not barefoot.

When a pedal car flies down a hill or is pushed really fast, the wheels move the pedals faster than a kid's legs can manage. The problem is that those pedals become an egg beater, winding your kid's shoelaces, jaunty silk scarf, or any other dangly bits in the mechanism. The pedals can also beat her shins up pretty badly, which makes for a terrible video to post on Facebook. Just keep the pedal car on a flat-ish surface and don't tie it to the bumper of your truck, and she's good to go — at a nice, slow, preschooler-appropriate pace.

If you're really looking for a reason to say "no" to a pedal car, Grinch, then there have been recalls of steel-bodied cars in the early 2000s for having lead paint. But that was just one company, and it was more than a decade ago — things seem to be fine since then. Finding statistics to back up your weird pedal-car phobia will be tough; most hospitals lump pedal car accidents in with bicycles and tricycles for injury reports. There are a lot more kids on bikes than there are kids in pedal cars. Those two-wheeled demons are responsible for most of the emergency room visits. Finally, if your heart grows three sizes that day, and you do decide to buy your Cindy Lou Who a pedal car, you could always teach her proper hand signals for stopping and turning.

I used to work at a magazine about collector cars — where to find them, what to pay for them, what condition they should be in. That is where I learned that pedal cars exist, because guys who like old cars for themselves really like little versions of old cars for their kids and grandkids. Little vintage Mercedes and new Porsches with pedals instead of transmissions would turn these gearheads into nostalgic jelly. And nothing opens a gearhead's wallet like nostalgic jelly. But I have to admit, the kids who got those cars almost always drove them with giant grins plastered across their faces.