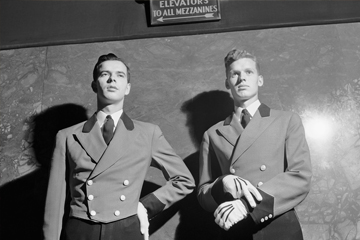 During the golden age of cinema, one of the most prestigious jobs a teenager could have was movie usher. With higher pay than most jobs available for young adults back then -- and the perk of seeing free movies -- many teens sought out this job in the 1940s and beyond.

The duties of the movie usher were myriad and serious. Theaters were fancier (more like Broadway theaters with curtains and richly upholstered seats) and ushers wore special uniforms, complete with gleaming shoes and shoulder epaulets. Along with showing patrons to their seats, ushers also greeted moviegoers as they arrived in the lobby. They directed patrons to the restrooms, snack bars, telephones and water fountains. They memorized the exact starting and ending times of every single movie showing. They were trained in handling disruptive or sick audience members and also had the power to reseat people in order to keep parties together or assure patrons' comfort.

The job of usher is quite different now. As movie theaters became more homogenized and chain-owned, other financial priorities superseded the need for ushers. Theaters funneled their money into upgraded equipment and licensing fees rather than paying for a fleet of ushers.

Today, a typical usher doesn't have time to perform luxury tasks for the audience, as his or her job has expanded to include the roles of ticket taker, snack bar attendant and custodian. Today's ushers don't make much money, either. The average wage for a movie usher is around $9 per hour, or $18,900 a year [source: Bureau of Labor Statistics]. What's more, going to the movies isn't the event it used to be back in the '40s and '50s. Catching a flick is a super-casual experience; back then, it was a grand night out and patrons were treated grandly, too.

One place you'll still find formal ushers is at live theaters, like on Broadway. A night out at the theater is still an experience. A typical Broadway usher has many duties. One is showing people to their seats -- seats they paid handsomely for. So if someone in the cheap seats tries to sneak into what they think is an empty, better seat, the usher is there to stop the interloper. Theater ushers are also on cell phone watch, something that certainly wasn't a problem back in the golden age of cinema. A ringing phone or illuminated screen can distract a performer and disrupt an entire show. And ushers have to deal with rude behavior in general: people putting their feet up on seats, unwrapping candy loudly, talking during the show or using a camera.

At least in the movies, the actors can't see you behaving badly.