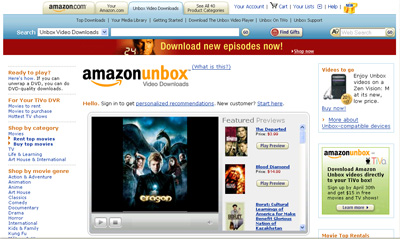 Today, if you want to buy or rent a movie, you have a lot of options. You can drive or walk to a store, pick up a movie and return it when you're done. If you'd rather not make the trip, you can sign up for a service like Netflix or Blockbuster Total Access and have your movies delivered to you. If you don't want to wait for the mail either, you can order and download movies online. In most cases, you can begin watching within minutes of starting your download.

Until recently, most people who downloaded movies online were using peer-to-peer file sharing programs, like BitTorrent and Kazaa, to share pirated videos. This usually violated copyright laws, but now there are lots of legal businesses that offer movies for sale or rent online. Terms of use, system requirements and selection of titles can vary widely from one to another. Similarly, different sites can use different protocols and applications to deliver movies. However, most movie download businesses have the same basic structure and operate using similar principles.

The most visible component is the Web site where you shop for movies. Most movie download sites organize their titles much the way retail sites do. You can search for specific titles, browse different genres or use ratings and reviews to help you decide which movies you want. Once you make a decision, some sites require you to use a download manager to get your movies. This is a program that can add your movies to a queue, resume paused downloads and keep track of which movies you've selected and paid for. Other sites require you to download and install a specific video player. For example, Vongo requires you to use its software rather than your Web browser to find and download movies.

Vongo software acts like a browser and a download manager, and it lets users set preferences for file management and connection.

Before buying movies, you typically have to set up an account at the Web site you've chosen. Some sites, particularly those that offer adult content, allow you to set parental control preferences. A few allow you to subscribe to a monthly download service rather than -- or in addition to -- paying for movies one at a time. Often, you can add favorite movies or genres to your account preferences, and the site software uses this information to make recommendations for you.

Here are the basic steps involved in buying and downloading a movie:

Exactly what you can do with your movie once it finishes downloading depends on where you purchased it. Some sites let you download movies on a rental basis, giving you 24 hours from the time you start watching to finish your movie. Your player, download manager or other software then removes the movie from your hard drive or makes it unplayable. Most sites also allow you to purchase movies, which are then yours forever.

How you can use those purchased files also depends on the site's digital rights management (DRM). This is one of the things you should pay attention to when choosing a download service. We'll look at DRM and other things to keep in mind in the next section. 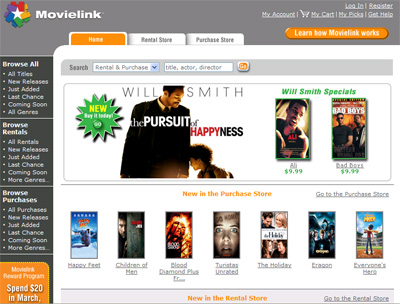 The big selling point behind movie downloading is convenience. You don't have to get in a car, stand in line or spend several days waiting as your DVDs travel back and forth between your home and a shipping center. But choosing a service that doesn't meet your needs can make the process pale in comparison to other purchase and rental methods.

The first thing to keep in mind is the platform that the site requires. Most movie sites require Windows XP. A few will also work with Windows Vista or Windows 2000. Only the iTunes Music Store supports the Macintosh operating system, and none of the major sites currently support Linux. Most sites also require Internet Explorer and Windows Media Player. Although you can view most sites in Firefox, the MovieLink site will only work with Internet Explorer with ActiveX control enabled. Amazon Unbox requires the Microsoft.Net framework, and Vongo requires a proprietary application.

For many users, the next big deal-breaker is the site's selection. Download sites get their movies from movie studios, which own the digital rights to the films. A site can't offer the movie without first negotiating an agreement with the studio. Some sites, like MovieLink, have agreements with lots of major studios, so they have a wide selection of mainstream movies. Others, like Guba, have a selection of free, independent movies as well as studio releases that you can rent for a fee. Vongo is owned by Starz Entertainment, and its selection reflects only what Starz has the right to broadcast.

When you find a site with a selection of movies you like, the next thing to look at is the quality of movies. There are a couple of measurements to keep in mind. One is resolution, which is measured in pixels. The higher the resolution, the better the image quality. For example, the movies in Wal-Mart's video download store have a resolution of 640 x 480 pixels, which is the same as the lowest standard television resolution. Wal-Mart also offers a scaled-down version for portable media players with a resolution of 320 x 240 pixels. You can also measure quality in bitrate, often measured in bits per second (bps). The higher the bitrate, the better the quality -- DVD bitrate is about 5 kilobits per second (kbps), or 5000 bps. The codec, or the program that encodes and decodes the digital video, can also significantly affect the quality of the video. However, sites don't always specify which codec they use.

Finally, before purchasing or renting movies online, you should thoroughly read the site's terms of use and familiarize yourself with its DRM. Some sites are relatively flexible. You can play movies on multiple machines, download them to portable media players and even burn them to DVD. Others sites offer far fewer options -- for example, Amazon Unbox received criticism shortly after its launch for the perceived inflexibility of its terms of use. Several sites allow you to make a backup disc that will only play on the computer originally used to download the file. For sites using streaming media, you never really own a copy of the movie, you simply watch it as it streams.

Once you've found a site that meets your criteria for platform, selection, quality and terms of use, a few simple questions can help you make your final choice:

To see a comparison of some sites' offerings, check out these articles from TechCrunch and ExtremeTech.

Next, we'll take a look at the movie download services that are available now. 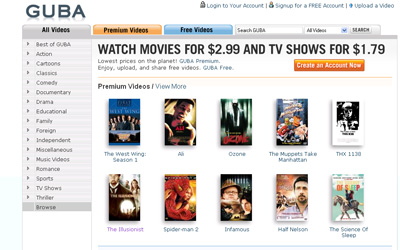 If you're interested in downloading movies, you have lots of services to choose from. Here's a quick look at the download sites that are available now:

Critics claim that the movie download craze won't last. Some claim that people won't pay close-to-retail prices for poor quality files that they don't actually own. In addition, many people have invested in impressive home theater systems, some of which magnify the lower quality of downloaded files. Getting the video from a computer to a TV can also be a challenge. However, supporters point out that downloading a film -- and being able to start watching almost instantly -- is the ultimate in convenience. At this point, it's hard to guess exactly what will happen.

To learn more about movies, movie downloads and related services, check out the links on the next page.

Watching lots of movies on a computer monitor or laptop screen probably doesn't sound very appealing. Fortunately, it's easy to connect your computer to your TV. The exact components you need can vary considerably depending on your setup. But all you need to do is find the right cables to carry both the video and the audio signals from the computer to the TV. Check out Techlore's tutorial to learn more.