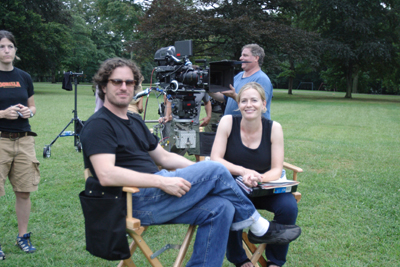 Inspiration for "Gracie" came from the childhoods of Elisabeth and Andrew Shue. Learn how the movie "Gracie" was inspired by the soccer-loving Shue family.
2008 HowStuffWorks

Andrew Shue has been fortunate to play out his life on many different fields. He has found success in such diverse roles as school teacher, professional athlete, actor, producer, community activist and business entrepreneur.

Shue has had many life-changing experiences that have shaped him in different ways. In high school his father inspired him to become school president and start a student group to serve the elderly in his town called Students Serving Seniors. The group still exists today and received a "Service" award from President Reagan in 1987. At Dartmouth College, as he was in high school, Shue was a Regional All-American soccer player and spent a winter studying and playing soccer in Glasgow, Scotland for Queens Park FC.

After graduating from Dartmouth with a degree in History, Shue traveled to Africa with his childhood friend Michael Sanchez and spent a year living in Zimbabwe, where he taught math to 200 African high school students and played soccer as the only white player in the African First Division for the Bulawayo Highlanders.

When he returned to America in 1991, Andrew set his sights on following his sister Elisabeth's path when he ventured into acting. By the middle of 1992, he had landed a coveted role on the then new hit Fox TV show "Melrose Place," where he played the likable Billy Campbell for six years. Along the way he had his greatest acting experience playing a pivotal role opposite Matt Damon and Claire Danes in Francis Ford Coppola's "The Rainmaker."

While living in Los Angeles, Andrew never let go of his love for soccer. He fulfilled a dream when he interviewed Pelé for "Good Morning America" while serving as the National Spokesman for the 1994 World Cup. Then in 1996, he earned a spot on the Los Angeles Galaxy in the debut season of Major League Soccer, becoming the first pro athlete to play and act on a TV show at the same time. His most memorable moment came back in New Jersey when he helped set up two goals in a 4-0 win over the MetroStars in front of 50,000 fans at Giants Stadium. He retired after two seasons in 1997.

Shue's social interests came full circle in 1993. Shue called upon his experiences in high school and Africa and teamed up with Sanchez to create a national non-profit organization called Do Something. Started with the belief that young people must be the drivers of social change, Do Something has reached millions of kids in all 50 states through school and web-based programs that teach young people to take the lead and to learn life's most important values by doing.

In 1999 Shue and his family moved back to the east coast and created a more consistent family life by finding success in business. As an entrepreneurs, he and Sanchez have led several successful start-up ventures, including the '94 Cup Daily and Clubmom and Cafemom, the nation's leading information and community Web sites for moms.

Shue most recently joined forces with his brother John, sister Elisabeth, and her husband, director Davis Guggenheim ("An Inconvenient Truth") to create the production company Ursa Major Films. Their first project and Shue's debut venture as a producer is "Gracie." Inspired by their true family story, "Gracie" was independently financed and controlled creatively by the Shues. Guggenheim directed the picture, while Elisabeth and Andrew have acting roles as well. "Gracie" is the story of a 16-year-old girl who honors her brother's memory when she attempts to play on the boys' high school soccer team and in the process brings together her broken family. Shue's experience in fundraising and the formation of strategic marketing partnerships allowed the team to create a groundbreaking business model for the film.

Andrew lives in New Jersey with Jennifer, his wife of eleven years, and their three sons. Since moving back to his home state from Hollywood, he has enjoyed the consistency of family life in suburbia -- coaching his kids' soccer teams and focusing on the little things that make life rich.