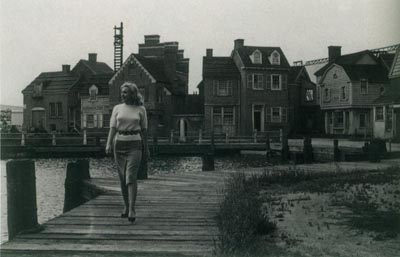 ­"I kept driving past the theater with my name on the marquee. 'Marilyn Monroe.' Was I excited. I wished they were using 'Norma Jeane' so that all the kids at the home and schools who never noticed me could see it."-- MARILYN MONROE, ON THE RELEASE OF LADIES OF THE CHORUS IN 1948

Norma Jeane walked into Ben Lyon's office at Twentieth Century-Fox in July of 1946 unsure of her future but certain of her goals. Lyon interviewed her about her background and inquired about any training she might have had in show business.

A nervous and frightened Norma Jeane admitted that she had no training or experience, but she volunteered, "I've tried to pick up all the camera experience I can around the photographers who've used me."

Impressed by her appearance but suspicious of her naiveté, Lyon asked her where she was living. When Norma Jeane replied that she currently resided at the Studio Club, Lyon knew that she was probably as innocent as she sounded.

The Studio Club, located in the heart of Hollywood, was a residential hotel affiliated with the YWCA that catered to young women seeking work in the film business. Norma Jeane was obviously "not playing the Hollywood game," as Lyon referred to it. That is, she was not the plaything of a Hollywood producer or mogul but was honestly trying to break into the film industry on her own.

Lyon had been in show business much of his life, first as an actor and then as a radio personality in England. Married to actress Bebe Daniels, he had teamed up with his wife for a series of film comedies in the States and then a long-running radio program in London.

Lyon's most significant role as an actor was in the film Hell's Angels, the epic World War I aviation adventure produced by Howard Hughes in 1930. At Lyon's urgings, Hughes had replaced the Norwegian actress Greta Nissen with Jean Harlow on that film when Nissen's accent became too much of a problem.

Lyon reportedly said of Norma Jeane Dougherty, "It's Jean Harlow all over again." Appointed executive talent director at Fox after the war, Lyon was adept at recognizing potential screen stars.

He was less interested in the amount of acting talent that Norma Jeane possessed than in her charisma and unique charm, which he knew would be magnified on the screen. Norma Jeane had screen presence -- just as Harlow had -- and Lyon saw it.

A few days after his initial meeting with Norma Jeane, Lyon arranged a screen test for Norma Jeane and set up a tentative contract with her agent, Harry Lipton.

Lyon supervised her screen test, which was shot by veteran cinematographer Leon Shamroy. The test was shot in color because Lyon realized that the stark nature of black-and-white photography might emphasize Norma Jeane's lack of experience, while color film would surely bring out her best qualities and enhance her screen impact.

Norma Jeane's "performance" consisted primarily of walking: She walked across the set, sat down, lit a cigarette, and put it out. She then walked upstage, looked out a window, sat down once more, walked downstage, and exited off-camera.

Though the test was silent and lasted only a few minutes, Shamroy, too, noticed Norma Jeane's resemblance to Jean Harlow. Shamroy later said, "This girl had something I hadn't seen since silent pictures. She had a kind of fantastic beauty like Gloria Swanson . . . she got sex on a piece of film like Jean Harlow. . . . She was showing us she could sell emotions in pictures." The Harlow comparison would surface again in the years to come.

A week later, Darryl Zanuck, who was head of production at Fox, saw the screen test and approved Norma Jeane's contract. She was to receive $75 per week for six months, at which time she would be reviewed and possibly signed for another six months. Norma Jeane Dougherty signed her first movie contract in August of 1946.

Only 20 years old at the time, Norma Jeane had to ask Grace McKee Goddard to cosign the contract for her. Though Grace readily obliged, there were really very few family members to rejoice in Norma Jeane's first success.

Grace and Doc Goddard had moved back to California after the war, but the relationship between Grace and Norma Jeane remained strained. Norma Jeane's mother, Gladys Baker, had been released from a San Francisco institution in 1945, just as her daughter's modeling career was getting underway, but Gladys had been unable to withstand the pressures of everyday life. She had returned to an institution, this time in Los Angeles, by the time Norma Jeane signed that first contract.

Because Norma Jeane and Jim Dougherty were on the verge of divorce, she had lost contact with the Dougherty clan as well. The aging Ana Lower remained her only close family tie.

Lyon remembered a stage actress from the 1920s whom he had long admired -- a musical performer named Marilyn Miller. He thought "Marilyn" would better suit Norma Jeane's new, glamorous identity as a Hollywood starlet.

For her part, Norma Jeane suggested her mother's family name, "Monroe," as a last name. Lyon liked the alliteration of "Marilyn Monroe," and told Norma Jeane that the double "M" was a lucky omen. So it was that in the course of one afternoon, Norma Jeane Mortenson Baker Dougherty was transformed into Marilyn Monroe.

She was forever grateful to Lyon for his support and his help. A few years later, when Marilyn Monroe was on top, she sent Lyon a photograph inscribed: "You found me, named me and believed in me when no one else did. My love and thanks forever."

Armed with a new name, and perhaps a new sense of purpose, Marilyn prepared herself for a career in motion pictures. Unfortunately, even moderate success would elude the hopeful starlet for several years. To learn about her early days as an extra and bit player at Fox, read the next article in our series, Marilyn Monroe's Early Career.