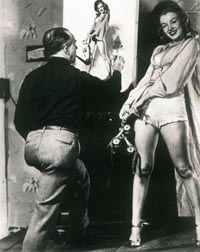 Norma Jeane modeled many times for illustrator Earl Moran, who shot photos for his own reference.

In 1946, Norma Jeane's modeling career had taken off, coinciding with the boom in exploitation magazines. Though virtually nonexistent today, these types of publications flooded the market after World War II, particularly after paper rationing ended in 1950.

Several types of exploitation magazines appeared on newsstands following the war. Some were devoted to lurid crime stories, others to dimestore romance or Hollywood scandal. A significant number were aimed at men.

Because Norma Jeane was not the tall, willowy type best suited for fashion modeling, she began to make her mark in pinup magazines such as Laff, Peek, See, Glamorous Models, Cheesecake, and U.S. Camera. A result of the popularity of the pinup during the war, these inexpensive magazines featured the best in cheesecake photography.

Contrary to what might be assumed today, the magazines did not include photographs of nudes but displayed women in bathing suits, negligees, towels, and other scanty but tasteful attire. By modern standards, the layouts are amusing, even innocent.

The pinup magazines played an indirect role in the Hollywood star system during this era by bringing certain models to the attention of the movie studios. Although eventually superseded and later forced into extinction by the bolder Playboy and its many imitators, these earlier magazines provided invaluable exposure for many ambitious models who aimed for Hollywood careers.

Norma Jeane posed for a number of photographers who sold their work to pinup magazines. One of the best of these photographers was André de Dienes, a fine technician gifted with a sensitive eye that enabled him to work with equal success in color and black and white.

De Dienes worked with Norma Jeane from 1945 to 1949, capturing her at the peak of her modeling career. Their photographic excursion into Nevada, Oregon, the Mojave Desert, and Yosemite in the winter of 1945 resulted in the famous series of photos of a fresh-faced Norma Jeane conquering the wilds of the Pacific Northwest.

Their last session together was a series of seashore photos shot at Tobey Beach in 1949, when Norma Jeane -- by that time Marilyn Monroe -- was in New York City to promote one of her early films. Sometime in between, de Dienes fell in love with his young model, proposing to her just before he moved back east. According to de Dienes, Norma Jeane agreed to marry him but broke off the engagement after he left Los Angeles.

Others who used Norma Jeane as a photographic model include calendar and magazine illustrator Earl Moran. Moran first hired her in 1946 and used her off and on until 1950. As discovered in the 1980s, some of Moran's photos of Norma Jeane, used by the artist as reference for his then-popular cheesecake illustrations, are striking semi-nudes.

Moran provided Norma Jeane with one of her few steady sources of income during those lean years when she was trying to break into the movie industry. Marilyn would later say, "Earl saved my life many a time."

Moran's comments about Marilyn echo those of other photographers from throughout her career: "She knew exactly what to do, her movements, her hands, her body were just perfect. She was the sexiest. Better than anyone else. Emotionally, she did everything right. She expressed just what I wanted."

Find out how Marilyn's movie career evolved from her pinup days on the next page.