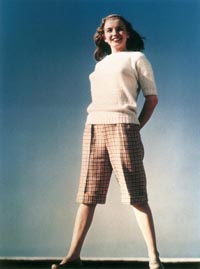 This 1945 photo by photographer Joseph Jasgur was one of those that confirmed Norma Jeane's affinity for the camera and that opened the door to a whole new world.

"Models ask me how they can be like Marilyn Monroe and I say to them, honey, I say to them, if you can show half the gumption, just half, that little girl showed, you'll be a success too. . . . there'll never be another like her." -- EMMELINE SNIVELY, HEAD OF THE BLUE BOOK MODEL AGENCY

After the initial Yank magazine photographic session with Conover, Norma Jeane posed for him on other occasions. As his freelance model, she was paid five dollars an hour -- to Norma Jeane, a substantial amount of pocket money.

Conover worked as an Army photographer for the 1st Motion Picture Unit, which operated through the auspices of the Hal Roach Studios. His commanding officer was an actor-turned-serviceman named Ronald Reagan.

Conover's work, including some photos of Norma Jeane, appeared regularly in such military magazines as Yank and Stars and Stripes. Norma Jeane was enthusiastic about her new vocation, and even consented to join Conover on a picture-taking excursion through Southern California.

Norma Jeane's ability to pose before the camera from the very beginning of her career has been widely acknowledged, though where that ability came from remains a mystery. Was she simply blessed with a natural charisma, as many biographers have assumed? Or, had she been working on her appearance because of a secret desire for a more glamorous career, as some -- including Jim Dougherty -- have suggested?

Others have attributed her photogenic quality to her skill at attracting the gaze of men -- a skill she supposedly perfected to gain the attention she was denied as a child.

Those who claim that Norma Jeane was simply fortunate to have a charismatic, natural ability regard this stage of her life as a predestined fairy tale, in which her talent would have been rewarded no matter what the odds. Those who suggest that she had been harboring a secret desire to be a model or movie star imply that she not only had some control over her life but was also actively working to fulfill her dream.

And those who insist that Norma Jeane was subconsciously trying to gain the attention or affections of men paint a portrait of a woman who was frightfully insecure and easily manipulated. The truth of Norma Jeane's abilities and motivations is probably a combination of these scenarios; each of them seems to be an accurate description of her at certain points of her life.

No definitive answer can be pieced together from the recollections of Conover, the photographer who "discovered" Marilyn Monroe. According to him, his reason for choosing Norma Jeane over the other girls at the Radio Plane Company was simply that "her eyes held something that touched and intrigued me."

Norma Jeane's ability to magically transform herself before the camera will probably never be fully explained; perhaps it is an injustice to her to try.

A commercial photographer named Potter Hueth became interested in Norma Jeane on a professional level after Conover showed him some of his photographs. Hueth asked Norma Jeane if she would be willing to work on "spec." That is, he would shoot some photos of her and then tout them to various magazines, but Norma Jeane would not get paid unless the photos were sold.

She agreed, providing she could pose in the evenings, after her shift at the defense plant. Find out what happened with these photos and the story behind Norma Jeane becoming a blonde on the next page.