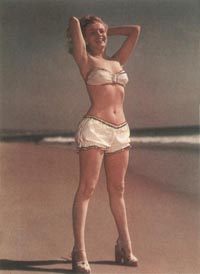 Norma Jeane's swimsuit photos became particularly popular with magazines and their readers. This one was taken circa 1948.

Despite Grace McKee's determination to keep Norma Jeane, circumstances did not permit it. Now an adolescent, Norma Jeane went to live nearby with Grace's maiden aunt, Ana Lower. The arrangement turned out to be a blessing in disguise because Aunt Ana provided the most stable home environment that the unfortunate girl had ever known.

Aunt Ana belonged to the Christian Science Church, and she introduced the young girl to its teachings. Norma Jeane remained a Christian Scientist for over eight years, marking her only lasting religious influence.

Though the tenets of the church eventually faded in importance for Norma Jeane, Aunt Ana's guidance never did. One of Norma Jeane's most prized possessions was a book Ana had given her about Christian Science. The inscription read, "Norma dear, read this book. I do not leave you much except my love, but not even death can diminish that; nor will death ever take me far away from you."

Norma Jeane attended Emerson Junior High School in Westwood Village beginning in September 1939. Thirteen years old at that time, she soon grew tall and her figure developed rapidly, causing a sensation among the boys at school. For the first time in her life, Norma Jeane began to receive favorable attention. Her stutter diminished and her level of confidence soared.

It was quite a change from the previous year, when the boys had called her "Norma Jeane the Human Bean" because of her rail-thin torso. Though she had fallen behind in school and had to repeat the seventh grade, she eventually made it up by skipping the latter half of the eighth grade.

Norma Jeane entered Van Nuys High School in September of 1941, but her days as a typical high-school girl were numbered. At about that time, Doc Goddard received a job promotion that required him to relocate his family to West Virginia. At some point it was determined that Norma Jeane would not make the move with the Goddards, and that 61-year-old Aunt Ana could no longer take care of her.

Grace decided that a convenient solution to all involved would be Norma Jeane's marriage to a local boy, 21-year-old Jim Dougherty. The only alternative, according to Grace, would be to send Norma Jeane back to the orphanage.

The Doughertys lived in the same neighborhood as the Goddards, and young Jim sometimes drove Norma Jeane and Eleanor "Bebe" Goddard home from school. Norma Jeane harbored a crush on Jim, who had been a football star and student body president at Van Nuys High School.

Jim -- considered quite a catch by Grace and Aunt Ana -- had a good job at Lockheed Aviation, an aircraft factory, where he worked alongside a handsome young man named Robert Mitchum. A dozen years later, Mitchum would costar in a film called River of No Return with Marilyn Monroe -- the former Mrs. James Dougherty.

Jim and Norma Jeane began dating casually in December of 1941, after Grace asked him to escort the budding young woman to the Christmas dance put on by Doc's company. A few months later, the courtship had progressed to several dates each week.

By May of 1942, the couple were engaged. Norma Jeane dropped out of University High School in West Los Angeles, where she had transferred in February, to marry Jim. The couple wed on June 19, 1942 -- less than three weeks after Norma Jeane's sixteenth birthday. Aunt Ana helped the Doughertys plan the wedding, and she gave Norma Jeane a simple but elegant wedding gown.

The Goddards did not attend as they had already moved to West Virginia, but Ida and Wayne Bolender came up from Hawthorne for the ceremony. Having never had a significant father figure in her life, Norma Jeane asked Aunt Ana to give her away.

Whether Mr. and Mrs. James Dougherty were generally happy or not depends on which account of the marriage one believes. Marilyn would later profess that she had been pushed into a loveless marriage by Grace and that she was never really happy. On the other hand, Jim Dougherty claimed that the young couple had been truly in love.

In 1953, Jim stated, "Our marriage was a good marriage . . . it's seldom a man gets a bride like Marilyn . . . I wonder if she's forgotten how much in love we really were." Perhaps with the benefit of hindsight, a mature Marilyn realized how much more life had to offer outside of her relationship with Jim.

Further evidence of Marilyn's discontent with the marriage includes her unwillingness to forgive Grace for maneuvering the young couple into matrimony, an act Marilyn later believed had been designed to ease Grace's conscience over moving out of state and leaving Norma Jeane behind.

In that first year, Jim and Norma Jeane Dougherty spent a great deal of time together and shared many activities. On closer inspection, though, it seems that those activities were more Jim's cup of tea than Norma Jeane's.

The young couple went fishing at Sherwood Lake, skiing at Big Bear Lodge, and occasionally to the movies or dancing. Jim Dougherty's recollection of this period suggests they led a carefree and fun-loving existence, while Marilyn recalled in a 1956 interview that she made a suicide attempt but "not a very serious one."

In the fall of 1943, during the middle of World War II, Jim began to feel the pressure of being without a uniform. He joined the Merchant Marine as a physical-training instructor, and the Doughertys were shipped to Catalina Island, off the coast of southern California.

The Doughertys remained secure as a couple until the following year, when Jim was shipped overseas. Norma Jeane moved in with Jim's mother and began work at the Radio Plane Company in Burbank, a defense plant owned by actor Reginald Denny.

At first she inspected parachutes, but she was later promoted to another area where she sprayed the fuselages of target planes with a pungent liquid plastic. Despite the hardships of this task -- the area was known as the "dope room" because of the fumes -- Norma Jeane was a diligent worker who won an "E" certificate for her excellent handiwork.

Within a few months, however, Norma Jeane was recognized for something other than her work habits. Army photographer David Conover visited the plant on assignment in 1945 to shoot photographs of women working to aid the war effort. He was searching for someone to boost the morale of the boys overseas when he discovered 18-year-old Norma Jeane Dougherty, who looked quite fetching even in her company overalls.

When Conover found out that Norma Jeane had a sweater in her locker, he asked her to model for his series of photographs for Yank magazine. Conover's appealing shots of Norma Jeane resulted in her first magazine cover and led to her career as a model.

Norma Jeane discovered that she was in her element as a photographic model. To say she was a "natural" wildly understates her ability to use the camera to enhance her beauty and to bring out her innate glamour and sensuousness.

Having never felt a sense of belonging in her entire childhood, Norma Jeane now knew exactly where she belonged -- in front of the camera.Learn how these first photos would help get Marilyn discovered on the next page.