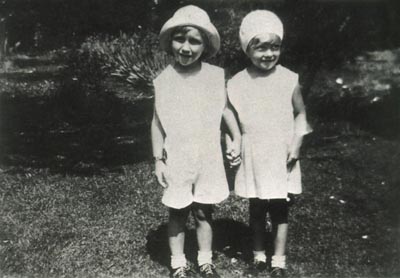 Norma Jeane's mother, who most often used the name Gladys Baker, placed the infant Norma Jeane in the care of Ida and Wayne Bolender of Hawthorne, California. Life had not been particularly kind to Gladys. She had had two children -- Berniece and Hermitt Jack -- by her first marriage to Jack Baker, but he had taken the children away from her and moved to Kentucky prior to her marriage to Edward Mortenson.

Supposedly, Baker had left a note for Gladys that read, "I have taken the children, and you will never see them again." The absence of her first two children caused Gladys great pain, and her inability to take care of Norma Jeane added to that heartache and stress.

Gladys's family had a history of mental instability. Both of her parents, Otis and Delia Monroe, finished out their lives in mental institutions, and Gladys's brother, Marion Monroe, suffered from a problem diagnosed at the time as paranoid schizophrenia. Gladys battled demons of her own and spent much of her adult life in institutions.

Whatever the exact nature of Gladys's disorder, Marilyn had a morbid fear of genetic insanity throughout her life. Though manic and schizophrenic disorders have a tendency to run in families, this does not necessarily mean that Marilyn inherited an emotional disorder. It is just as likely that her early life of deprivation and insecurity accounted for her later psychiatric problems.

Ironically, perhaps, when Gladys boarded out Norma Jeane to the Bolenders 12 days after the baby's birth, it was because of financial difficulties -- not mental ones. Gladys went back to work at Consolidated Film Industries, paying the Bolenders five dollars per week to look after her baby. Each Saturday, Gladys would take the trolley to Hawthorne to visit Norma Jeane, who remembered Gladys as "the lady with red hair" rather than as her mother.

A devoutly religious couple, Wayne and Ida Bolender lived a comfortable existence in Hawthorne, a less-than-fashionable suburb of Los Angeles. Wayne worked as a postal carrier and was fortunate enough to remain employed throughout the Depression. In his spare time, he printed religious tracts.

Marilyn would later remember the couple's devotion to their religion as one that approached zealousness. She claimed that as the young Norma Jeane, she had to promise never to drink or swear, she had to attend church several times a week, and she was repeatedly told that she was going to Hell. Norma Jeane quickly learned to hide from the Bolenders if she wanted to sing, dance, or act out a fantasy life "more interesting than the one I had."

Though Norma Jeane regularly attended church with the Bolenders, she was taken by her grandmother, Della Monroe, to the Foursquare Gospel Church to be baptized by the flamboyant evangelist Aimee Semple McPherson. Della, a devout follower of Sister Aimee, had her granddaughter christened "Norma Jeane Baker."

When Norma Jeane was two years old, Della suffered a complete nervous breakdown, which led to her commitment to the Metropolitan State Hospital at Norwalk in Los Angeles County. A month later, Della died of a heart attack during a seizure.

Around 1933, Gladys and Norma Jeane experienced a change in luck. Gladys had earned enough money to put something down on a white bungalow near the Hollywood Bowl; for the first time, Norma Jeane actually lived with her mother.

At the time, Gladys was working as a film cutter at Columbia Pictures, but to make ends meet, she rented out most of the house to an English couple who had fringe jobs in the film industry. The man was a stand-in for the English actor George Arliss, while his wife was registered as an extra.

The atmosphere around the house was much looser than it had been at the Bolenders, and Norma Jeane's activities were not as restricted as before. She frequently attended the movies, most often at Grauman's Egyptian Theater but also at Grauman's Chinese Theater.

There, in the famed cement forecourt, she would place her small feet in the footprints of Gloria Swanson and Clara Bow. Much later in her life, when the world knew her as Marilyn Monroe, she would literally follow in those stars' footsteps when her own prints were captured for posterity.

The reunion of Gladys and Norma Jeane was all too brief. As the months went by, Gladys became increasingly depressed until, one morning in January of 1935, she lost control. Unable to calm Gladys down, the English couple telephoned her closest friend, Grace McKee, who suggested they call an ambulance.

Some accounts of this tragic episode report that Gladys came after Grace with a kitchen knife. Whatever the specific events, Norma Jeane's mother was taken away, first to Los Angeles General Hospital and then to Norwalk, where Della Monroe had died just a few years earlier.

Except for very brief periods, Gladys was institutionalized for the rest of her life. As she grew older, she too became fixated on religion and the need to atone for past sins, just as Della had done.

The English couple, whose names are not known, kept Norma Jeane for the better part of a year, though they were forced to move to a small apartment when they could not keep up the payments on Gladys's bungalow. Eventually, the couple returned to England, and Norma Jeane moved in with some neighbors, the Harvey Giffens.

Giffen offered to legally adopt Norma Jeane, as did one of Gladys's coworkers from Consolidated Film Industries, but Gladys refused. After the Giffens moved to Mississippi, Grace McKee was named legal guardian for the luckless little girl.

On September 13, 1935, Grace took Norma Jeane to the Los Angeles Orphans Home Society because she was unable to financially provide for her at that time. Norma Jeane's admittance to the orphanage represented rock bottom to a child whose short life had been nothing but a succession of low points.

Marilyn often painted a dark portrait of her two years in the orphanage, giving the impression that it was much harsher than it actually was. She claimed that she had to wash 100 cups, 100 plates, and 100 knives, forks, and spoons three times a day, seven days a week. For her efforts, she received five cents a month, four of which went into the collection plate at church.

Later, officials would dispute her version of daily life at the orphanage, pointing out that the children were not regimented to certain tasks and that great pains were taken to make the children feel they were part of one, big, happy family. More than likely, Norma Jeane was never mistreated at the Orphans Home Society, but her feelings of abandonment, loneliness, and insecurity were certainly accentuated by the experience.

In the summer of 1937, Grace at last rescued Norma Jeane from the orphanage. Earlier that year, Grace had married Ervin "Doc" Goddard, who had three children from a previous marriage. The couple was trying to establish some semblance of a normal family life in Doc's little home in Van Nuys.

Despite her attempts at domestic harmony, Grace decided to place her ward in a foster home. For poor Norma Jeane, it was a case of jumping out of the frying pan of the orphanage into the fire of a succession of foster homes.

During the Depression, couples who took in foster children received money from the state, an arrangement that did not encourage the noblest of motivations for helping out parentless children. Norma Jeane was so miserable in the foster homes in which she was placed that she asked Grace to send her back to the orphanage. It was then that Grace and Doc decided to keep Norma Jeane themselves.

At some point in her childhood, perhaps during this hazy period of foster-home existence, or perhaps even earlier, Norma Jeane was sexually molested. In recounting the story in later interviews, Marilyn variously gave her age at the time of the incident as 6, 8, 9, or at some time in adolescence. According to Marilyn, a family friend or boarder in the foster home in which she lived at the time molested -- or raped -- her in his room.

When she told her foster mother what had happened, the woman refused to believe her. In some versions of the story, the foster mother actually slapped Norma Jeane, shouting, "I don't believe you. Don't you dare say such things about that nice man." The resultant trauma left the terrified girl with a stutter, though in early interviews Marilyn attributed her childhood stutter to her abandonment at the orphanage.

Her lack of specific recall and her overall tendency to embellish stories about her childhood have led some insensitive biographers to assume that Marilyn invented or greatly exaggerated the molestation story to gain sympathy. Those who knew her personally, however, attest to the emotional honesty in her recountings of the past. Though the details of her story may vary, the basic truth seems to be that she was sexually abused as a child, and the memory haunted her for the rest of her life.

Find out about Marilyn's growth into a young woman and why and who she married so young on the next page.