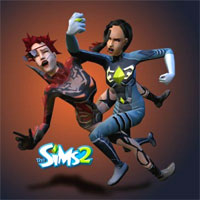 A space marine stares through his sniper rifle's display as two of his enemies have a philosophical discussion about life and box canyons. A group of spandex-clad superheroes dance in unison to a 1950s rock song. Two lumberjacks explore their new impenetrable fortress. All of these people have something in common -- each started out as a video game character before becoming an actor.

­Gamers and designers have found ways to push the boundaries of what video games can do for years. In the mid '90s, some gamers began to use video games to create original films. This kind of filmmaking is called machinima. Before long, filmmakers used machinima to tell stories that had nothing to do with the games themselves.

Machinima takes its name from the combination of the words machine and cinema -- technically, the word is misspelled, but that's how it was first written and it has stuck. Machinima filmmakers are called machinimists or machinimators (the two terms are used interchangeably). Machinima films use virtual environments and actors to tell stories. Most of the time, a video game is used to provide the setting, props, costumes and even actors. Machinima can be as simple as an in-game recorded video of a player racing through a level or as complex as a feature film with plot twists and extensive character development.

At first glance, a machinima film looks like a computer-animated movie, but the actual filmmaking process is more like a live action movie than computer animation. In computer animation, programmers must create every environment, texture, character and object. They also must create a physics model and dictate the range of motion that objects and characters have. In machinima, the game's programmers have done all of this for you. Objects, characters and environments are rendered in real time, meaning that they appear as solid objects and can move in any way the game's creators have programmed.

Making a computer-animated film requires hours to render a single frame of animation, but in machinima, it is instantaneous. By using a video game, machinimists leave nearly all of the most difficult parts of computer animation to game developers. Machinimists work in virtual worlds that artists and programmers have designed and created. Most machinima relies exclusively on the respective video game's library of animations. Some machinima artists will tweak existing animation or even create new animation using separate software, but for the most part the video game developers have already provided all the animation a machinimist will need to tell a story.

Machinima is also significantly cheaper than computer animation. A basic "Quake" movie could cost as little as the price of the game. Even if you splurge and buy top notch software and hardware to produce your machinima, you're likely to spend less than $10,000. A computer-animated motion picture may have a budget of $100,000,000 or more.

In this article, we'll talk about how machinima is made, why it's so popular with filmmakers and audiences, some legal issues machinimists face and some popular machinima movies and series.

In the next section, we'll go over some basics of machinima.