Browse the article How Lightsabers Work 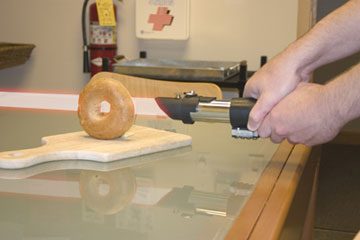 We’ve all been there before. It’s 3 p.m. at the office, and you’re positively famished. The snack machine is empty, and the only piece of food in sight is a bagel hard enough to bust windshields. You’ve snapped three plastic butter knives trying to slice the thing in half, and there’s no way it will fit in the toaster whole.

Then you remember the office lightsaber. Ten seconds later, you’re spreading cream cheese, and the low-blood-sugar monster has retreated.

It's hard to imagine life without lightsabers. We use them to ward off belligerent alien drunks, to deflect blaster bolts and to remove unwanted hair in the bikini area. Plus, meals on the go are a cinch with a little saber-grilling action.

These fabulous plasma weapons make daily life possible, yet it's easy to take the technology for granted. The household lightsaber is actually a highly sophisticated gadget, and in this article, we'll show you how it works.

So gather round, Padawans, and watch as we void the warranty on our own office lightsaber and reveal the gadgetry inside.

It's All In the Handle 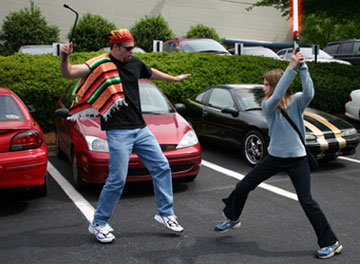 Never bring a tire iron to a lightsaber fight.
HowStuffWorks

Lightsaber design is a very personal choice. Your average soccer mom or wandering Jedi outcast tends to carry a classic, single-bladed weapon. Stroll into a trendy New York nightclub, however, and you'll glimpse socialites and Sith Lords with curved, forked and double-bladed lightsabers.

Despite the bells and whistles, all lightsabers share the same general characteristics.

A typical saber hilt is roughly 12 inches (30 centimeters) long, about the size of a large flashlight. Yours may be a little longer or even a hair shorter, but don't let that concern you. The full length of the weapon won't be obvious until it's turned on -- and even then, it's all about how you use it.

One end of the hilt goes in your hand, and the other emits a deadly column of energy. Do make sure you know which end is which. The "safe" end of the hilt features a handgrip, belt ring and an on/off switch -- also known as an Activation Matrix if you want to sound fancy. And then there's the "business" end of the hilt, complete with blade arc tip and magnetic stabilizing ring.

Now turn on your lightsaber and the blade should rapidly extend to its set length. If it doesn't, this may be due to a drained battery, overuse or stress. If you're not satisfied with the length or intensity of your blade, the hilt features one or two adjusting knobs to alter power and length. These options come in handy for melting through armored doors, caramelizing the top of a crème brûlée or cleaning hard-to-reach stains.

Is your lightsaber fully extended now? Trying waving it around a bit. The blade will make a distinctive crackling sound typical of an arc wave energy field. You should also feel a gyroscopic effect in the handle, which again is a distinctive characteristic of the arc wave blade. This gyroscopic effect can take some getting used to, so be sure to handle any active lightsaber with extreme care until you are completely familiar with its feel and handling.

Now take the hilt in both hands and let's see what you can do with it.

It breaks our hearts to tell you this, but lightsabers only exist within the fictional Star Wars universe. This article is a celebration of that fiction. If you'd rather read a factual account of lightsaber special effects, then dive into How does a Star Wars lightsaber work? 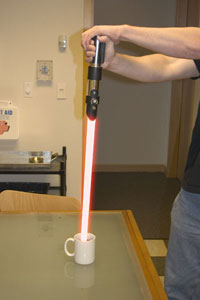 There are hundreds of uses for a lightsaber in the household alone -- and only a few of them involve dismembering kitchen droids -- but most lightsaber techniques boil down to four key actions.

Slicing: From tauntaun bellies to Tofurky roast dinners, lightsabers excel at slicing clean through stuff. Experiment with different angles and speeds for maximum effect, but remain mindful of your surroundings. An offhand lightsaber swing can cut through reinforced beams, plumbing, electrical wiring or grandmothers.

Stabbing: A lunging stab or a sneaky activation of your lightsaber next to an adversary's chest is a great way to end a saber duel -- at least in the movies. In everyday life, however, it's a great way to begin carving a large space mammal or to steadily build up heat in a larger mass. This leads us to our next action.

Melting: Yes, as made evident by your many cauterized nicks and scratches, the blade of a lightsaber gives off a lot of heat. Run it through a large cut of beef and you'll quickly notice the pleasant aroma of cooking steak. Alternately, this is a handy way to destroy things that can't otherwise be sliced -- such as a blast door on a starship. Just activate your lightsaber, stick it in and watch the hot dripping begin. Who needs keys? You'll be through in no time.

Deflecting: Should some prankster try to slice you with a lightsaber, remember that you can deflect his or her attack with your own lightsaber blade. This trick also works on bolts of energy fired from a blaster pistol or rifle. In most cases, you'll want to deflect the bolts back at the person who fired them at you in the first place, but with enough practice, you can also redirect them just about anywhere. Either way, it helps if you have a strong affinity for the Force, as this will enable you to anticipate the exact trajectory of the incoming bolt.

Force usage can also enable fancy saber throws and boomerang retrievals, but these techniques should only be attempted in duels or to impress girls. 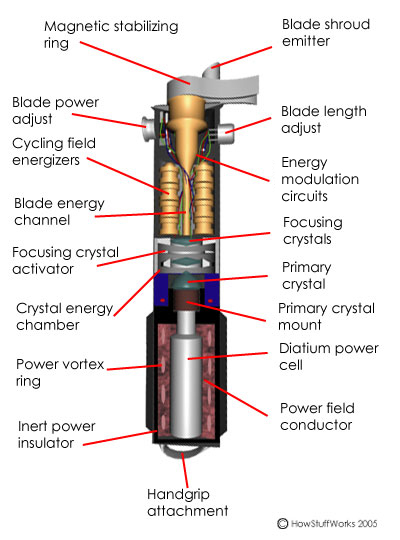 Peek inside the lightsaber.
HowStuffWorks

The art of lightsaber construction, like many things in life, generally passes down by word of mouth from Jedi Knights and Jedi Masters to their young Padawan learners. Oh sure, there are pamphlets and educational films, but there's no substitute for experience when creating a shaft of brilliant plasma. If you don't know a Jedi Master, don't fret: They also manufacture the weapons in China.

Crack open any two lightsaber hilts and the interiors may differ somewhat, but the key features are remarkably consistent across lightsabers. In each, you'll find the major components that follow.

So, the next time you slay a snow monster or warm up a cup of coffee with your trusty Jedi melee weapon, take a moment to think about all the technology that makes it possible. 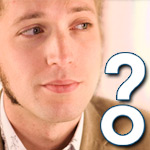 I grew up with Star Wars and brandished many a flashlight as my own make-believe lightsaber, but it’s one of those fantastic sci-fi inventions that I never stopped loving. I played an unhealthy amount of “Star Wars Jedi Knight II: Jedi Outcast” the summer of 2002, and while I groaned as much as the next fan about the prequel trilogy, the lightsaber duels themselves delivered big time. I even watched a few of them again for this article, and for a good half-hour there I was 8 again, rooting on my favorite Sith Lords. Yeah, I was one of those kids.

"How Lightsabers Work" was one of the first HowStuffWorks articles I read, long before I actually joined the editorial team. So, when the opportunity came up to work with this article and add my own name to the byline, I jumped at the chance. Dozens of new lightsaber styles have entered service since this article initially published, but the "science" still holds up nicely.