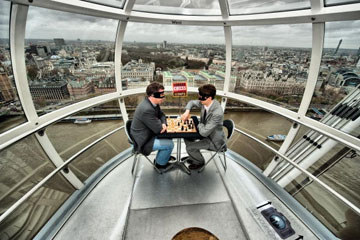 Because of its knights, rooks, kings and queens, you might think chess began in medieval times. But in truth, the game has its roots in India where it's believed to have been played as early as A.D. 300. This original game, called Caturanga, required four players. But the board (64 squares), pieces (Rajah or pawn, ship, horse, elephant) and moves are similar to the modern game [source: The Chess Page].

Throughout history, variations of the game have evolved based on where and when it arrived. Byzantine chess was played on a circular board; the chessboard used in Germany beginning in the 13th century was 12 squares by eight squares and had three additional pieces.

With its foundation in the Indian version of chess, both China and Japan developed their own versions of the game, both of which are still played today. In Siang K'i, the Chinese game, the board has a five by nine grid on each end (one green and one red), separated by a moat. Players move on the intersection of the grid marks with the goal of placing the highest ranking figure, in this case the general, in check.

Japan's version of chess, called Sho-gi is played on a nine by nine grid. Each player has 20 game pieces of different value and ability to move, but all 40 pieces are the same color. Opponents' pieces are distinguished from each other by the direction they point, which naturally leads to a set of rules unique to this version of the game [source: The Chess Page].

With a few exceptions, modern chess, the game played around the world today, resembles the ancient version played in India. In the 15th and 16th centuries, the queen gained significant power with her ability to move in any direction. A rule called "castling" was introduced to protect the king. But, that's getting ahead of ourselves. The next section will explain the rules of play.

The elephants in the Indian version of chess and the knights in the Western game reflect different cultures. In addition to the character differences, until the mid-19th century, the pieces also showed class distinctions. Wealthy players' game pieces were heavy and ornate, while everyone else used lumps of wood that varied in height. In 1847, John Jaques designed the pieces we recognize today, placing symbols that represent the characters on top of pedestals of different heights [source: Chess - Online Guide].

Despite being an ancient game, today chess is enjoyed in the most modern ways. Players can compete against opponents all over the world via the computer and they can even play against the computer. Chess history was made in 1997, when a computer named Deep Blue 2 beat the best player in the world Garry Kasparov [source: Chess - Online Guide].