by Laurie L. Dove
Prev NEXT
9 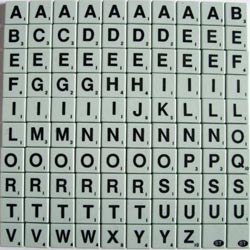 This is a full 100-tile set from an English-language Scrabble game. Knowing how many of each letter is in the game and keeping track of what's left to be played can give you a serious advantage.
Agentsoo/Wikimedia Commons

If you're like many players, you're probably wary of the swap. It's a risky move because in swapping, you also pass on your turn to lay down a word. However, if you're stuck with a rack full of tiles that are getting you nowhere, the benefits of swapping are great. The trick is knowing when to make the exchange.

You can swap any or all of the tiles on your rack for unused tiles -- as long as there are enough unused tiles left to make the exchange, one for one. Swapping tiles is a good way to exchange low-point tiles for potentially high-point tiles, or to break up multiples of the same letter. (Es are endlessly useful, but just what are you going to spell with five of them?) If you're really stuck and can't come up with a word, making a swap could inspire your inner vocab whiz [source: Lawrence].

Keep in mind that with great reward comes great risk. But if you've been keeping track of the letters that have been played, and deducing which letters are probably still in the bag, you can make an informed decision. It's only when you don't have an educated guess about which new tiles you'll gain that swapping is too big a gamble. Otherwise, it can be a useful tool.