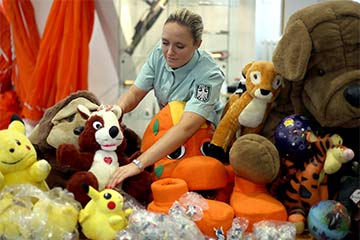 The United States has high standards when it comes to the safety of children and the manufacture of toys. For example, lead in paint is illegal in this country. And toys for very young children can't have small parts that they may swallow or choke on. This means that reputable toy companies that want to sell their products in the U.S. conduct regular and rigorous tests to ensure the safety of their toys.

Knock-offs, however, are not generally built to any standards or subjected to testing or regulation, so, yes, they can be dangerous. Sixty-seven percent of counterfeit goods – including toys – come from China. The U.S. Department of Justice takes the import and sale of knock-off toys very seriously, prosecuting people who import and sell them – and often make millions of dollars in the process [source: UNODC].

While prosecuting those who import and sell knock-offs in the U.S. does happen, tracking down the manufacturers of the toys or the components is often impossible. The various toy parts may be manufactured in different facilities, then put together in yet another facility, which means there is little recourse if it is discovered that one or more parts of a toy are dangerous.

While larger toy companies do have recalls of their toys -- in fact, they have the most recalls -- they also have teams of people working to ensure toys are as safe as can be for children. In the U.S., the Consumer Product Safety Commission (CPSC) also works to help keep kids safe with a database of recalled toys and investigations of reported problems. If you suspect a toy is counterfeit, don't buy it. If you end up with a counterfeit toy, report it to the CPSC. Not only can knock-offs be dangerous, they are also illegal.