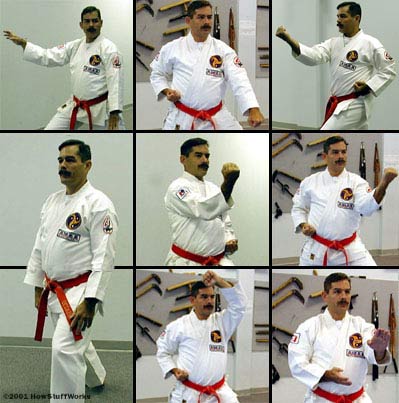 ­In the last section, we saw that two fighters bring a certain amount of energy to combat. A karateka channels his or her own energy in order to maximize the force of attack. But in karate, it's just as important to channel your opponent's energy. Karatekas do this with intelligent blocking maneuvers.

Like any moving object, a punch or kick has its own momentum, the product of its mass and velocity. Velocity (and by extension, momentum) is not only a measurement of speed, but also of direction. To put it another way, two objects with equal mass and speed have a different momentum if they're going in different directions.

The force of impact between two objects is largely determined by the objects' momentum. To see how this works, imagine a car speeding toward a wall. If the car crashes into the wall head-on, the direction of momentum is directly perpendicular to the wall. The front of the car and the area of wall it crashes into experiences the maximum force of impact, and both suffer maximum damage. But if the car collides with the wall from the side (as you might hit protective walls flanking a highway), the direction of momentum is at an angle to the wall. The momentum keeps the car moving forward, so the wall only feels a small fraction of the total force.

Flying feet and fists are something like speeding cars. If somebody punches you squarely in the chest, you feel the brunt of the fist's force. In karate, the object is to intercept the fist so that it contacts your body from the side and you redirect its momentum away from you. You do this by sweeping your opponent's arm or leg away from you with your own arm. Depending on the attack, karatekas may sweep a blow upward, downward or to either side. With this sort of blocking, you still end up colliding with your opponent, but you only feel a fraction of the force of the attack.

This also turns your opponents' momentum against them. When you sweep a blow away to the side, your opponents' own momentum pull them forward, upsetting their balance. This leaves them vulnerable to attack; you can land a successful hit or pin them to the ground. You might also grab attackers and pull them forward, increasing their forward momentum. Using this defense, a karateka can throw attackers to the ground. Throwing is not a central element in karate, but it does play an important part in other martial arts forms, notably judo and aikido.

In karate and other martial arts forms, you might pull opponents toward you to increase their forward momentum and throw them off balance.

To protect against attacks, karatekas take on particular fighting stances. Generally, karatekas stand with one leg in front of them and one leg behind them. This effectively shields the front of the body from attack, and gives the karateka better balance. Karatekas hold themselves with their center of gravity relatively low to the ground, so it is more difficult for an opponent to knock them down.

In a karate competition, both karatekas concentrate on guarding themselves against attack while waiting for an opening in their opponent's defenses. Often, a karateka can land a successful hit immediately after deflecting the opponent's attack, as this is when the opponent is most vulnerable. A lot of karate is based on paying attention to what's going on around you, so you can recognize an opportunity when it arises.

In the next section, we'll look at this sort of karate competition, as well as some other ways that karatekas demonstrate their skill.