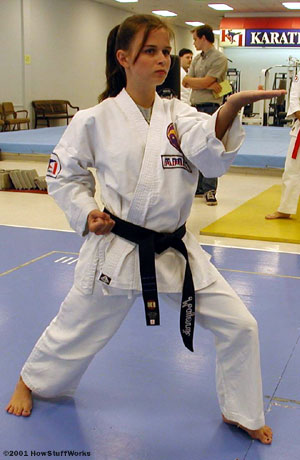 Karate is one of the most widely practiced martial art forms in the world. Martial arts rely on acute physical coordination and mental focus. They were developed in Asia (primarily India, China and Japan) over the course of several thousands of years. In all this time, there have been countless martial arts variations, and there are hundreds of disciplines practiced today. (Check out this site for more information on martial arts history.)

­Modern karate developed out of martial arts forms practiced in Okinawa, an island that is now part of Japan. For hundreds of years, Okinawan martial arts experts honed a variety of combat styles, in part due to the political situation in the area. From time to time, the ruling authorities would ban peasants from possessing any weapons, leaving them with only their own bodies and household items to protect themselves. (This played a part in the development of martial arts elsewhere in Asia as well.)

A man named Funakoshi Gichin is credited with carrying the karate form beyond its geographical roots. In the early 20th century, he brought together elements from many Okinawan fighting styles and introduced the combat technique to mainland Japan and, eventually, the rest of the world.

Karatekas generally credit the creation of modern karate to Funakoshi Gichin's son, Funakoshi Yoshitaka. While his father practiced full contact karate, where fighters delivered unchecked blows, Yoshitaka believed in a more peaceful application of the fighting principles. In this form, properly called karate-do, or "karate way," karate is seen as an all encompassing approach to life, rather than only a system for combat. Karatekas curb their punches, concentrating mainly on physical, spiritual and mental development rather than competition.

The word karate is Japanese for "open hand" (kara means open and te means hand). Te signifies that your main weapon is your body. Instead of an arsenal of swords or guns, the karateka cultivates a personal arsenal of punches, kicks and deflection techniques. Kara relates to the psychology of karate. Karatekas are open to the world around them, making them better equipped to handle any attack.

In the next section, we'll look at some of the basic principles of karate, to see how karatekas execute such amazing physical feats.

Karatekas wear a gi, an outfit consisting of white, loose-fitting pants and a jacket cinched closed with a belt. The color of the belt indicates the karateka's skill level, or kyu. The most advanced karatekas are ranked by their dan. Here is a typical ranking system, in ascending order: