Puppeteering as a Means to an End 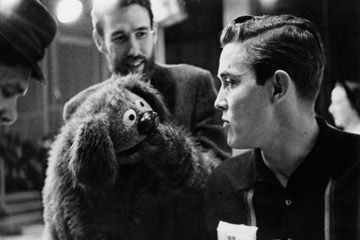 Rowlf the Dog, pictured here on the set of "The Jimmy Dean Show" with Jimmy Dean and Jim Henson, was the first Muppet to make it big on national TV.
Michael Ochs Archives/Getty Images

As a small child in Mississippi, Henson spent a lot of time with his maternal grandmother, who was an artist and helped to foster his creative gifts. Many biographies cite his love of ventriloquist Edgar Bergen on the radio, the puppet show "Kukla, Fran and Ollie" and the work of puppeteer Bil Baird as inspirations for his later work. However, Henson said that as a child, he wasn't interested in puppets and didn't play with them [source: Harris]. He also loved the zany humor of comedian Ernie Kovacs and the irreverent, satirical productions of musician Spike Jones. Henson basically loved the medium of television and begged until his parents bought one in 1950. He knew that he wanted to be a part of it.

Initially majoring in studio art in college, Henson took a puppetry course, as well as courses in textiles and crafts. He soon found a way into TV by puppeteering for local children's TV shows but considered puppets just "a means to an end" [source: Finch]. In 1955, Henson started working for another local TV station with his own puppet show, "Sam and Friends." He also had a successful business making silkscreened event posters and was known for his highly detailed, colorful and imaginative painting style.

"Sam and Friends" did well, but Henson was unsure about making the commitment to being a puppeteer after he graduated from college. A tour of Europe, where puppeteering was considered a serious art form that could entertain all ages, helped with his decision. After returning to the U.S., he married his puppeteering partner, Jane, and his puppets began appearing in commercials for everything from coffee to dog food, as well as on national talk shows. He formed his own company in New York in 1963 and hired Frank Oz and Jerry Juhl shortly afterward, when Jane quit puppeteering to raise their children. Throughout the 1960s, Henson Productions focused primarily on making commercials.

In 1969, Henson was invited to be part of a pilot for a new children's television show called "Sesame Street." Once the show got going, making commercials became a thing of the past.

Next, we'll delve into Henson's role on "Sesame Street" and find out how he worked to avoid being typecast as a children's entertainer.