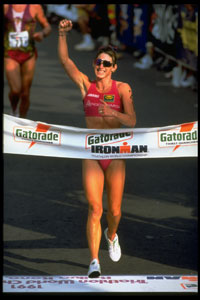 Paula Newby-Fraser may be the greatest triathlete of all time.
Tracy Frankel//Time Life Pictures/Getty Images

There are several Ironmen notable for their exemplary accomplishments, such as course records and number of wins:

Luc Van Lierde holds the Kona course record, completing it in 8:04:08 in 1996. Paula Newby-Fraser holds the course record for women, 8:55:28 in 1992. Van Lierde also holds the all-time Ironman record, completing Ironman Europe in 7:50:27 [source: Outside Online]. Newby-Fraser is widely considered the greatest triathlete ever. Her other records include: most Ironman victories ever (24); most victories at Kona (8); and most consecutive victories at Kona (4) [source: Multisports.com]. The men's record for most Kona wins is shared by Dave Scott and Mark Allen, with six each.

Then there are the Ironmen notable for their courage and perseverance, for whom simply completing the race is a monumental triumph, whose stories are truly inspiring.

The legend of Ironman really began with Julie Moss. In 1982, she ran at Kona as part of her thesis in sports physiology. It was one of the first Ironmans televised by ABC. Toward the end of the race, Julie found herself in the lead. Within sight of the finish line, her body gave out. No longer able to stand, she was passed by Kathleen McCartney, who won. In a truly unforgettable scene, Julie crawled across the finish line on her hands and knees to take second place. It cemented in the American consciousness the idea that just finishing an Ironman is a victory.

Marc Herremans was an Ironman before a bike training accident left him paralyzed. Although he must be carried to the starting line, he never stopped training and has completed several more Ironmans in a wheelchair.
Marco Garcia/Getty Images

Sister Madonna Buder may not be the only Ironman who is also a nun, but she is in a class all her own. Every year that she competes in an Ironman, organizers have to create a new women's age group for her. She completed the Ironman Canada as well as Kona at the age of 75 [source: Online Gonzaga Bulletin]. In the men's division, Jim Ward ran at Kona when he was 80. He had completed the race at age 77.

Team Hoyt is a father and son pair that competes together. Rick Hoyt has cerebral palsy and was born with brain damage due to a problem at birth. He is unable to talk or walk, but a device that allows him to communicate helped him reveal that he loves sports. When a schoolmate was paralyzed in an accident, Rick asked his father, Dick Hoyt, if they could run in a 5K benefit race. They did, with Dick pushing Rick in a wheelchair. They moved up to marathons and eventually triathlons. Rick sits on a raft that Dick tows as he swims. Then, they ride a bike with a seat in front for Rick. They are both Ironmen [source: Team Hoyt].

In 2007, Scott Rigsby completed the Kona race on two prosthetic legs [source: WALB News]. Ten years prior, Australian John MacLean completed the Ironman in a wheelchair, using a hand-cranked bike for the second portion of the race [source: Ironman]. Sarah Reinertsen became the first female amputee to enter the Kona race in 2005.

For more information on triathlons, marathons and pushing the human body to its limits, see the next page.