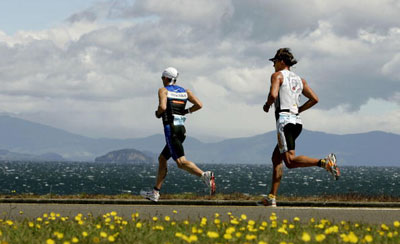 There are dozens of different training guides and plans for everyone from professional triathletes to beginners just thinking of trying a sprint distance event. Training programs can range from a few months to an entire year, depending on the type of triathlon and the competitor. There are a few training guidelines that are generally a safe bet.

There have been some reports that extreme endurance athletics can cause heart attacks or even cancer [source: Seek Wellness]. If you're not in good physical condition, you should talk with a doctor before beginning a training program. Some endurance athletes have suffered heart attacks, and there is evidence that the buildup of free radicals in the body during extended bouts of exercise can increase the chances of developing cancer. However, these risks are considered slight, and far greater than the dangers of not getting exercise.

This brings us to the question: If it's so hard, why do people put themselves through it? Ironman competitors know that, in the course of the race, they'll experience great suffering. But the sense of accomplishment and the pure physical feeling of overcoming that suffering makes it worthwhile to them.

On the next page, we'll meet some notable Ironmen.

There are also shorter distances for youth races and "Ironman 70.3" events that are exactly half as long as an Ironman. Some people have unofficially tackled even longer distances, usually some multiple of Ironman distance accomplished over multiple days. [source: Edwards].