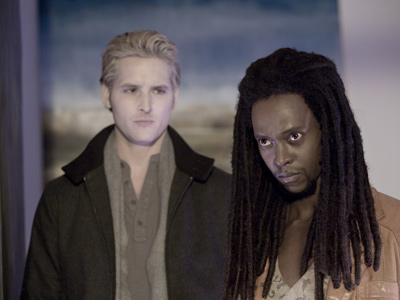 Stephenie Meyer wasn't vampire obsessive when she literally dreamed up "Twilight's" story one night in June 2003. A self-described "enormous scaredy cat" who can barely handle Hitchcock films, she was a full-time mom to three boys with no intention of pursuing a writing career. But she penned her novel, sent it to the one agent of the 15 she contacted who'd responded favorably, and within two months had a three-book deal with Little, Brown.

Paramount's MTV Films bought rights to the book the following year, but the script commissioned by the studio "had nothing to do with 'Twilight,'" says Meyer, who was relieved when the studio opted out of making it. Unwilling to repeat what she calls a "horrifying experience," Meyer was gun shy when Summit Entertainment approached her, and only relented when the company agreed to contractually abide by her creative rules: no fangs, no coffins, no garlic, no stakes through the heart. And nobody dies that doesn't in the book.

­"My vampires don't need fangs. Strong as they are, it's kind of unnecessary. They don't sleep, and they do have reflections. You can take pictures of them. In my world," Meyer explains, "these are myths that vampires spread around so that people would say, 'This person can't be a vampire because I can see them in the mirror, so I'm safe.'"

Meyer worked closely with screenwriter Melissa Rosenberg and director Catherine Hardwicke throughout the process. "They let me have input and took 90 percent of what I said and incorporated it right into the script." She visited the set four times, and was talked into making a cameo appearance in the movie. She's the woman at the counter in a scene between Bella and her dad, Charlie (Billy Burke).

For Rosenberg ("Step Up," TV's "Dexter"), dramatizing a book that's largely the internal thoughts of the narrator Bella was the greatest challenge, along with adhering to Meyer's rules, and that came with pressure. "I didn't want to be the writer who ruined 'Twilight' for a generation of teenagers. I knew that the way to satisfy the fans was to be true to the book," says the writer, who included much of the novel's dialogue. "The voice-over is almost word for word from the book," she notes. "It's about capturing the voice of the book and the characters so the audience is taken on the same emotional ride."

Of course, some things had to be dropped in the service of the main love story, including the back stories of supporting characters, an­d the nomadic vampires -- the tale's villains -- appear earlier in the movie than they do in the book. Rosenberg also had to find a way to include several chapters of question-and-answer dialogue that explain the vampire mythology. "It was about taking bits and pieces of it and peppering it throughout the scenes."

­Director Hardwicke faced the task of making the conversation-heavy novel more visual and dynamic, and that involved a lot of location shooting in one of the wettest areas in the country --perfect for the story, but not so great for production.