How to Play Hearts

by Karolyn A. Schalk
Next
Hearts is a classic card game in which the object is to score the least amount of points. Here's how to play:

Number of players: Two to six, but four is the best number for those who enjoy tactical play. If three players, discard the

2, leaving 51 cards in the deck. Since each player will have 17 cards, pass four instead of three cards. If more than four players, get rid of the lowest clubs so that every player has the same number of cards. For example, if five play, get rid of the

3. Thus, each player will have ten cards.

Object: To score the least amount of points.

Dealing: All cards are dealt clockwise.

Passing: Three cards are passed with each hand, except for every fourth hand. Select three cards to be passed, stack them facedown, and give them to the appropriate opponent. You must select and pass the cards from your own hand before you can look at your new cards.

First hand: Players pass three cards from their hand to the player to their left.

Second hand: Players pass three cards to the player to their right.

Third hand: Players pass three cards to the player sitting opposite them.

Fourth hand: No cards are passed. This cycle of passes repeats until the end of the game.

Playing: The player with the lowest club must lead it to the first trick. The play continues clockwise. The next player must follow suit if possible. If the suit can't be followed for the first trick, any card may be played except for a heart or the

Whoever plays the highest card of the suit led wins the trick and leads to the next trick. After the first trick, a heart or the

Q can be "dumped" on the trick if you are out of the suit led. Hearts can't be led until after a heart has been played as a discard to another trick (this is called "breaking hearts"). The game continues until one player has reached or exceeded 100 points at the conclusion of a hand.
Scoring: At the end of play, all the hearts and the

Q are tallied, with each heart scoring one point and the

Q scoring 13 points. Count the penalty points for the scoring cards among all the tricks you've won. For example, if you have

Q, your score is 18 points. The one exception is when you "Shoot the Moon" -- when you take all the hearts and the

Q, in which case you can choose to have either all your opponents assessed 26 points or your running total be reduced by 26 points.

As soon as one or more players score 100 or more points, the game ends, and the player with the lowest score wins. 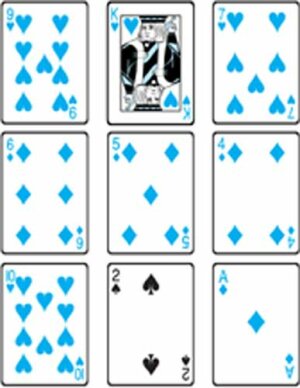