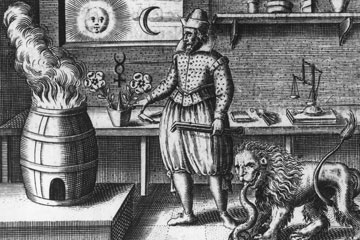 An alchemist chases the secrets of nature in this 1618 engraving.
Hulton Archive/[urlGetty Images

In "Frankenstein," Victor ventures into his study of chemistry with a zeal for the antiquated world of alchemy. While his professor dismisses this enthusiasm as a grievous waste of time, alchemy ultimately inspires Victor to crack the secrets of life itself.

Alchemy during the 16th through 18th centuries was essentially a mix of early chemistry and occultism, crossing empirical research with mystical philosophy. Alchemists slaved over real (and sometimes explosive) chemical experiments, but they did so without the regulation of modern scientific method. Instead seeking guidance in magical texts and secret codes, they sought to transform base metals into gold and even achieve immortality via an elixir of life known as the philosopher's stone.

It was a meandering path to say the least -- and one that ultimately impeded the rise of modern chemistry [source: Wilford]. Yet some alchemists managed to stumble upon some genuine scientific discoveries. For instance, 17th century German alchemist Hennig Brandt distilled countless buckets of urine in an attempt to turn the pungent liquid into gold. As you might expect, Brandt 's experiment failed to produce the desired results -- but it did allow him to discover the element phosphorus. Alchemy might have been an imperfect field of study, but it was often the only game in town for inquisitive, talented minds such as Albertus Magnus and Isaac Newton.

The fictional Frankenstein's work closely resembles alchemical attempts to produce a minuscule artificial humanoid known as a homunculus. A medieval text known as the "Liber Vaccae" or "Book of the Cow" lays out the homunculus creation formula in bizarre detail. The process begins by mixing human semen with a mystical phosphorescent elixir and ends with a newborn homunculus emerging from a cow, growing human skin and craving its mother's blood inside a large glass or lead vessel [source: Van der Lugt].

Yes, it's all quite disgusting, but here's the point: While lost amid false concepts of spontaneous generation and magical tomfoolery, alchemists were pondering the possibility of creating an artificial "rational animal" through the learned manipulation of organic tissue.

At the time, it was widely believed that humans could mimic and manipulate such natural reproductive processes. But biological science was still incubating, and humanity's first breakthroughs came in the form of machines.