How do they really shoot reality TV shows? 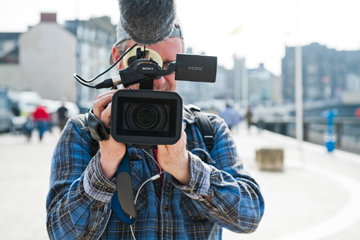 How are reality shows shot? In some cases, the process is pretty structured.
Photofusion/UIG via Getty Images

I don't want to brag, but I'm kind of a reality TV star. A few years ago, my house was featured on HGTV's "Curb Appeal: The Block," and for one glorious week videographers followed me around, capturing my every pithy word. So, though I'm no expert, I can tell you firsthand how networks shoot reality TV shows.

First of all, show producers come up with a plan. For my episode of "Curb Appeal," architect-designer and host John Gidding sketched the improvements he planned to make to my home. The show found subcontractors, got the necessary building permits and put together a construction schedule. Then they blocked off a week to give my "dilapidated and boring" house some "much needed charm" [source: HGTV]. On the first day of filming, Caryn Johnson, one of the camera operators – and now a great friend — filmed me in front of my king-cake colored, uncharming bungalow talking about how having "man candy" like John Gidding in my front yard was "gonna raise my cred in the 'hood for sure." (Don't judge: I was nervous!) The producers had a general idea about the arc of the episode, and videographers filmed each day's action, getting footage that editors would later cut together to make the show.

In addition to filming organic footage as it happened, most reality shows, including "Curb Appeal: The Block," also shoot predetermined scenes — called "beats" — designed to capture specific pieces of needed footage. For instance, in the scene where John Gidding revealed his sketches to me, the producers had me sit on my front porch, playing guitar and pretending that John just happened to stop by. On "Curb Appeal," beats were staged but never scripted. Other reality shows feature beats that are more bogus.

The "Curb Appeal" videographers also filmed regular interviews with me and with the hosts, during which we discussed progress or the hosts described some technical aspect of the project. My videographer friend Caryn calls these interviews "candids," "OTFs" (on-the-flys) or "VOX POPs" (an abbreviation of vox populi, which is Latin for "the voice of the people") [source: Johnson]. On some reality shows (think MTV's "The Real World"), OTFs are shot to look like self-recorded confessionals. In these cases, producers may set up a video camera in a private area and allow cast members to push a button and record what they are thinking or feeling. Other times confessionals only appear to be self-recorded while, in reality, a producer is asking questions and leading the discussion.

For me, shooting a reality show was a great experience. The crew and the hosts were all totally down to earth, and the episode that aired accurately reflected the action that had taken place. Other reality shows, however, might not be as real. Find out how reality TV works — and lots more — on the next page.

10 Cooking Shows That Changed the Way We Eat
King of the 'Hill Street' Quiz: How Much Do You Know About TV Icon Steven Bochco?
Why don't all TV networks stream their shows online?